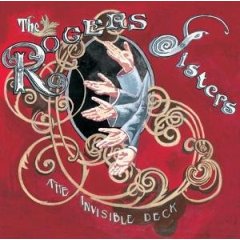 Let's make things clear: The Rogers Sisters, to my knowledge, have never played a USO show. They have never worn matching outfits speckled with tassels. They are, in fact, not even all sisters. What they seem to be is (a) loud; (b) rockin' and (c) not taking any prisoners. Falling into what I've grown to call New Wave Garage (yes!), populated by the likes of Mclusky (R.I.P.), Invisible Eyes, Yeah Yeah Yeahs and all the descendents of Sonic Youth and Mission of Burma, the Rogers Sisters are fuzzed-out rock and roll with a touch of punk (as if Sid Vicious became a magical fairy dusting all of them with punk). The Invisible Deck is a solid collection that succeeds on both being thunderous and catchy at the same time.

The album opens with pounding drums and a wicked guitar riff that would make Iggy jealous and dives straight into the formula of the Rogers Sisters: half-shouted vocals that go back and forth from Miyuki Furtado and the actual Rogers Sisters (Laura and Jennifer). "Why Won't Wait" might be one of the more perfect opening tracks on an album this year. It is full of an electric tension and garage catchiness that defines The Invisible Deck and leaves you panting for more by the time it rumbles to an end. The lead vocals go female on "Never Learn to Cry," adding a very Sleater-Kinney edge to the song, with the prominent guitar over the lashing beats. This same formula is repeated but with Miyuki taking vocals on "The Light."

If there's anything that the Rogers Sisters excel with, it producing songs that feel like the band is frantically playing for their lives as if they're in some sort of cosmic Josie & the Pussycats band competition where the loser must perish in a fiery interstellar death. "The Clock" just radiates this frenzied atmosphere and it just surges into "You Undecided" where heavily distorted guitars criss-cross along the melody. When they slow things down on "Your Littlest World," the drums rolls along with the bass that is reminiscent of the Breeders circa Title TK and it becomes the perfect late night dance song as if they were rewriting music for The Crow. This is just about the only time the Rogers Sisters let the beat slow down. In more of an Invisible Eyes-like turn, "Emotion Control" has a 60's rock rhythm that snakes around the fully distorted guitars and rumbling bass as the sisters trade off vocals with Miyuki.

Some of their just never seem to get enough life in them, like "Money Matters," a track that alternated between a quieter verse with garbled, raucous chorus evocative of Hole, but it just never gels. "The Conversation" could be the angry, guttural cousin to a B-52s song but it doesn't feel like it goes anywhere. They close The Invisible Deck with "Sooner or Later" which starts out promising, but is just a little too long to work well with the band's typical formula. You want them to come out of the gate roaring and keep things short and sweet.

The Invisible Deck is an all-out rock and roll album that isn't ashamed to be just that. If that's what you're in the market for these days, then you'll want to start going steady with the Sisters (Dating sisters! Patrick Maitland would be proud). It's almost summer, you probably need a good dose of blazing rock to get yourself out of the Pacific Northwest Mogwai winter blues, and the Rogers Sisters will provide you just such a remedy. It's like musical Vitamin D without the sunburn.