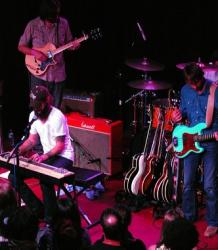 The line for the “super secret” MySpace show at Seattle’s premier all-ages venue, Vera, was as intimidating as some of the hobos I had just seen dancing in front of Siberian’s set at the REVERB festival just minutes prior. Hey — beggars can’t be choosers. A free show is a free show and whoa… a free show is an even better free show when the band playing said free show is one of your favorite bands ever: BAND OF HORSES!

Tyler Ramsey is a young fellow with mean guitar skill and an incredibly impressive amassed amount of facial hair. His music was soft, yet brilliantly defined, the tumbling arpeggios combining smoothly with his ethereal, husky vocals. Like Kool-aid and water, I think that’s the metaphor I’m looking for: Tyler Ramsay’s music was like a long, cool swig of paradise punch in the heat of summer, a sweet drink that everyone in the Vera thirstily sipped and passed around.

Though Band of Horses has relocated South Carolina since the release of their first album, Everything All the Time {review}, the Seattle spirit in their music prevails yet. Ben Bridwell is one of my absolute favorite vocalists of all time. His voice is an amalgamation of Wayne Coyne meets standing-on-the-Fremont-Bridge-in-winter-at-2AM meets Fender-Twin-Reverb-Amp meets the number 11. Honestly, I think if Ben were to yell into a brown paper bag, it would echo. The sound of his voice alone to me is the prize of the technically (former… but whatever!) Seattle band. It’s foggy, crystal clear, and immeasurably powerful all at the same time.

The band ripped through a marathon of songs off their first and second albums, even tossing in a couple of covers. By the end of the night, their songs reverberated in my head like a long loud echo off Mount Si.

“Yeah dude!” Ben Bridwell coaxed the audience, “Get some!” By the end of the night, we had all gotten earfuls of something. Being a frequenter of live music, I’ve had countless sound waves enter my tympanic membranes. That something is different for everyone, but I can tell you: tonight, that “something” was beautiful.