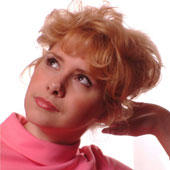 Nellie McKay at the Crocodile

I spent much of my weekend cursing myself for not shelling out the money to find my way to New York City to attend Parkerfest, the annual celebration put together by the Dorothy Parker Society to celebrate the life of their (and my) literary heroine. I’ve always been drawn to Parker’s reported wit and agree with those that say she’s the most quotable writer of the past century.

Rather than flying to Manhattan to commemorate the life of a clever New Yorker who has been dead for 40 years with hundreds of people I don’t know, I was fortunate that another New York writer with a razor-sharp wit found her way to Seattle last Saturday night. The fact that she can sing, play piano and write clever songs – even better.

There are countless reasons to adore Nellie McKay. She’s very intelligent, jazz-influenced songwriter with a wicked sense of humor and a lovely voice with lots of range. At one point during a very public battle with her label, she reportedly distributed the personal e-mail address of the head of her label at shows so fans could express their support for her directly. She also named her first album Get Away from Me to mock Norah Jones’ debut Come Away with Me. I could go on and on but you dear readers would think I was a 14-year old with his first celebrity crush.

She didn’t do anything that brazen as give out her label chief's contact info during her set at the Crocodile last Saturday, but that doesn’t make it any less engaging.

McKay performed for over 90 minutes to a packed Croc full of appreciative fans. Sometimes they were a little too appreciative – several times audience members sang along loudly and off-key, essentially drowning out the performer they paid and packed in like sardines to see. Yet you can’t fault them for their enthusiasm – or taste in music. Much better, for example, was when the crowd provided McKay with the backing parts during “Mother of Pearl” – the first track off of her new album Obligatory Villagers. The album has only been out for two weeks yet was on the wall, in the head, memorize it till they’re dead of the majority of the crowd. Like Randy Newman, McKay doesn't shy away from using humor to address political points. That track is a hilarious critique of feminism (“feminists have a tumor on their funny bones”) and got the biggest laugh and applause when she ended it with “I’m Dennis Kucinich and I approved this message”.

Most of the songs McKay played (if I counted accurately 26 altogether) were at a grand piano. She played a handful on a ukulele but the piano suited her better. When she was seated and with keys in front of her, her voice was confident and strong. When she stood up and chose strings instead of keys, her voice was softer and belied a nervousness. She also made a statement against Columbia University for its use (abuse?) of eminent domain laws and encouraged the crowd to visit stopcolumbia.org to learn more about the school’s unsavory history of displacing workers and low-income housing dwellers. Then she went straight in to a parody of the college with its biting Sinatra-aping chorus “West Harlem is a tramp”.

For me, though, the highlight was “Zombie” (also from Obligatory Villagers) – McKay sang and danced to a backing track. With her earnest vocals and awkward dance moves, it just might make for the cutest thing I’ve ever seen. McKay’s set (did I mention it was over an hour and a half! 26 songs!) was charming and funny, and entirely engrossing. Arguing with herself from the stage, she said she should end the show because people had to get up for work the next morning and then said she was suspicious of them because it was Saturday night. I genuinely did have to get up for work the next day (at 4:30 no less) but I could have easily stayed out the whole night listening to her and never be bored or uninterested once. Really, there was no place I'd rather be than present for this remarkable and memorable show.