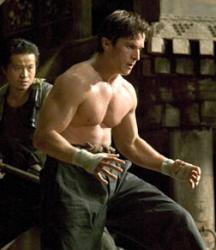 It's blockbuster season, when my expectations are categorically lowered by all the movies with explosions here! there! EVERYWHERE! Sometimes this leads to overrating anything that shows a spark of creativity — not the case here. Christopher Nolan's take on Batman's origin is so well done that I'm tempted to call him the inheritor of Hitchcock's psychological acuity.

We join Bruce Wayne (Christian Bale) in what appears to be a northern Chinese prison, where he's bottomed out hard. Here he's recruited by mentor/life-coach/ninja Liam Neeson, who teaches our young magnate about fighting, embracing fear, and how to get high from certain flowers. Inevitably, Bruce will return to Gotham, don the cape, and save the day. The beauty of the film is that Nolan knows all of this is absurd — Joel Schumacher didn't — and so takes his time rationally showing us how Bruce Wayne the destitute turned into Batman the gravel-voiced. The costume doesn't even appear until an hour into the film, and by the time it does, it feels completely logical.

This is something you just don't see in comic book adaptations. The conventional method is to work backwards, showing a superhero's origin with the same verve as you do their powers later on. Which is fine, and can be done very well (Spiderman comes to mind). Batman Begins fully grounds itself in reality and still pulls off everything you want — the villians, the flying, the cool gadgets. A very impressive balancing act, to be sure. Nolan sustains a dark mood throughout, while finding room for humor (when Bruce tries to keep up his image as a billionaire playboy) and stylish tricks (when Cillian Murphy's excellent Scarecrow deploys his fear-inducing drug).

Of course, there are minor flaws. Katie Holmes, as an assistant DA, comes off as a kid playing dress-up. And Gotham's citizens are overly-prone to Sad State of Our City statements. Despite these, Batman Begins is saved from cliché by the earnest acting and Nolan's assured hand.