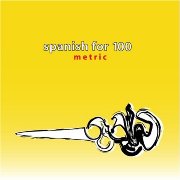 The local band Spanish for 100 was recently chosen by John Richards of KEXP as "Your New Favorite Band", and it's sort of easy to see why. Their new six-track release Metric has whispers of uber-popular Modest Mouse and Built to Spill running through it…and that's no surprise, since they all share the same producer/engineer, Phil Ek.

When I first listened to this album, nothing in particular struck me about it, and I found myself getting distracted while it was on — which isn't usually a good sign. Then I went through it again and listened closer. And I began to hear little gems within the songs. I can't go all out and say that this is one of the best CDs I've heard, but I can say with some conviction that there's something here worth paying attention to.

Spanish for 100 vacillates between faster-paced rock and slower, sweeter ballads, often within the same song. "Go Away, Come Home" and "Fell a Bird" are two that are on the faster side, and I felt like the pace was a bit contrived. I didn't realize that until I'd heard a slower song called "Jungle with Lions", a gorgeous, Neil Young-esque, laid-back indie rock feast of a track. The two-part harmonies overlaid on a consistent but never boring melody are sincere and forthright, whereas the other two tracks seemed like they were trying just a little too hard.

"Golden Days (part 1 & 2)" provides a good example of their two distinct styles. "Part 1" is only 1 minute and 50 seconds long, but its beautiful, haunting guitar made me wish it went on longer. "Part 2" is longer, and the transition is instantly identifiable, as it kicks off with a strong guitar wall. Afterwards, the song sways between tense, pulsating rock and mellow, lapping guitar melodies. The latter (in my humble opinion) is the stronger of the two for this band — and I'm the sort who nearly always goes for the louder, more rockin' stuff. But Spanish for 100's real strength seems to lie in their ability to craft sweet, almost-folk songs that enrapture the listener. When they rock out, it feels like they are pushing to create something. When they slow down, it comes naturally.

The final track on Metric, "See Now", was recorded live at the Crocodile in Seattle in 2004. There's almost a psych-pop element to this one; it's reminiscent of Modest Mouse too, but in a more relaxed way. This song seems to be a testament to what I believe about this band: even as it begins to rev up through its cycles of speeding up and slowing down, you can sense its reluctance to gain energy, and it comfortably falls back to a more shuffling gait….which feels just right.

If Spanish for 100 can find a happy balance between fast and slow, and between rock and folk, and stick to it, good things will come to these obviously talented musicians. They have a bunch of live shows coming up in the Seattle area, so check them out (and holler out for "Jungle with Lions" — you won't be sorry).