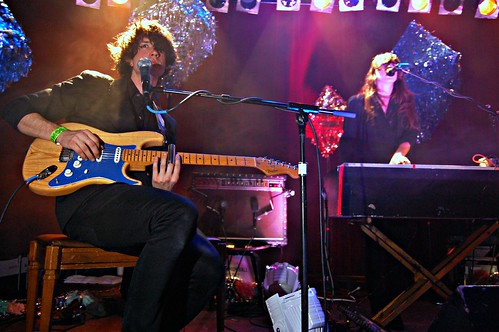 Before the band came out on stage Monday night, Neumos looked like a high school gym after a dance- lot’s of tinsel. Unlike the sad charm of an empty gymnasium, this show was sold out. As the band began and a green light hit the stage, and the reflective nature of tinsel became the perfect set décor for the self-reflection they induce. Beach House is a band that allows the listener to glean their own impressions from their songs and carve out moments of personal meaning.

This being the case, my balcony corner seemed more like a lonely wallflower perch where “Better Times” transformed into a couples-skate-only. Though there weren’t any roller skates. Or room enough for a couple to dance for that matter. “Zebra” captured the feeling that came along with the lovely vocal harmonies of the band, the adolescent hope we won’t all become separate and lonely beings eventually. Something that Legrand drove home when she introduced “Silver Soul” by saying that touching strangers is great. Something that Beach House’s music is adept at. Yet, everyone seemed to want their space, their time to feel like they were the only people in the room being sung to, the only person struggling with not being “the same as they used to be.”

An apocalyptic beginning to “Master of None” was permeated by streams of white light hitting the demure band members, Victoria Legrand’s occasional, singular, head bang being the most movement on stage. Perhaps it was the band, paying such rapt attention to their instruments, that somehow I felt left out. I’m sure I’m not the only one who has felt jealous of Legrand’s keyboard, but when it comes down to it, Beach House was not a spectacle. It was more of a time for introspection and for this reason, not to mention the rib shaking waves of drone washing over the audience, Victoria Legrande, guitarist Alex Skully and live drummer, Dan Franz had a powerful hold over the audience.

At the end of the set, as the disco ball began to spin during “Take Care,” that high school dance I never got asked to came back to mind and the song felt full of the youthful naivety that things can last forever, a tragic faithfulness to a blind commitment. In the end, even though I walked home alone, not all was an outcast’s imprint on the show. I was saved some runny eyeliner by the epic encore of “10 Mile Stereo” ending a night that I’m sure was an individual experience for ever single body in the fulled-to capacity Crystal Ball Reading Room this Monday.