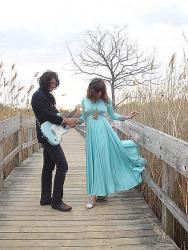 I wanted to go see Beach House perform at Chop Suey the second I learned they were coming through town. I wanted to hear, and see, the way that their exquisite brand of pop translated in a live setting. I love Chop Suey as a venue for several reasons, and dislike it for others. It's small, and impactful bands make for great entertainment there. The downside to the size of the venue is that more often than not, the bands that play there draw a crowd large enough to pack it to the gills. A club throbbing with sweaty verbose hipsters isn't exactly my idea of a memorable show experience.

The second opener, Papercuts, played to a pretty large crowd, nearing 85% full. The project of Jason Quever, accompanied by Trevor Montgomery, Alex Scally, and Glenn Donaldson, Papercuts are a rambling pop band, devotedly analog and acutely layered. Upon hearing them perform I wondered if they were the same band that I'd listened to countless times on my iPod, bopping my way to work. Live they felt underwhelming, their tempos stagnant and their sound overtly Thom Yorke-ish. I tried to enjoy their set, but along with the majority of the crowd stacked around me, I took to talking to my show mate instead.

Surprisingly, after Papercuts and in anticipation of the main act, people started filtering out of Chop Suey. The floor cleared a bit and the dull roar died down just as Beach House, Victoria Legrand and Alex Scally, appeared on stage. Their performance was nothing short of captivating. And if it wouldn't have been for the absolutely wretched sound at Chop Suey, they would have been even more stunning.

Hazy and quixotic, like something out of 1960's underwater ballet, Beach House played. Their songs parlayed into each other, fitting like one solid body of work. They played a lot of songs from their newest LP Devotion, but also several favorites from their previous self-titled, including the haunting "Saltwater" and the cathedral organ charmer "Tokyo Witch." Legrand's hushed coos and their overall eerily loping sound melted into an organ-induced ray of warmth. They kept the stage banter light, preferring to just play their songs, and finished off the set with the enchanting "Master of None."

Legrand's voice is beguiling. It almost escapes comparison. I hear Nancy Sinatra, in those darkly angelic Lee Hazelwood days, or Stevie Nicks when she's belting out in the low register. Between the two of them, there was almost a Carpenters-on-acid vibe that was delectably seventies and shoe-gazer at the same time. Beach House is arid and real, the wrenching sound scape to a desert dream. Their sound fit together seamlessly live, but I still think that this kind of lo-fi lulling is best experienced between a set of high quality headphones. The full effect of Beach House is realized only then, rendering the listener rapt with the sounds of an unpretentiously beautiful wash of wonderment.