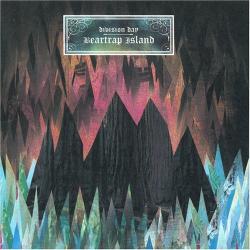 Reading the biography for Division Day is like looking at a wish list for my high school reunion: Four friends from the Southern California area play music together while they are young, part ways to take on various endeavors, and then converge again four years later to record their debut LP. I mean it almost sounds like a plot to some movie aimed at the tween set a la Sisterhood of the Traveling Pants (okay, so we own that movie, shoot me!). I mean, this same scenario has played out in my own life, all except for the last part: I had crappy garage bands in high school and college, but ten years later, I have little-to-no idea where the members of those groups are, and wouldn’t know where to begin in the process of recording an album with them.

Division Day’s debut LP Beartrap Island is an ambitious record. The disc has ideas bursting out of every corner, often giving the album a ragged and unfinished appearance. This can work to good and bad results: Album opener “Beartrap Island” attempts to be the moody instrumental enterlude that opens many concept albums. It’s a tough move for such a young band, and in this instance it turns out to do little for the album, except turn away potential listeners. Those listeners, however, should stick around as the should-be album opener, “Ricky,” is ferocious and unrelenting. This energy continues into “Catch Your Death” and “Lights Out,” two songs that both start out ragged, eventually shaping themselves into pop melodies that seem to be drawn from the catalog of the Promise Ring or Maritime. Additionally, tracks like “Tigers” illustrate that Division Day has unique ideas and youthful exuberance when it comes to creating pop tunes.

However, there are also moments throughout Beartrap Island where Division Day’s lack of experience in the music world is evident and it seems the band is struggling to find its own uniform sound: “Hand to the Sound” meanders with a strong reggae influence, sounding like a B-side of a UB40 single; “To the Woods,” while catchy, draws upon post-Bleed American Jimmy Eat World; and despite somewhat brilliant moments, “Tap-Tap, Click-Click” sounds like the song that every band wrote in the mid-2000s after rediscovering Gang of Four.

But I can’t get all down on these kids, because Division Day is doing a lot better than my group of friends from high school. I mean they got back together, recorded an album, and are now trying to live their dreams. And you know what, the album isn’t half bad, its actually quite good. And with all the ideas that these kids have come up with, they are bound to go somewhere. Now if I could only say that at my high school reunion.