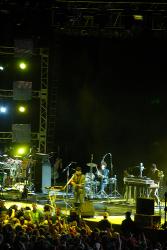 When the Beastie Boys and Bjork were announced as headliners for this year's Sasquatch festival, I reacted with collective “ehh”. I had grown up with the Beasties; I can remember singing “Brass Monkey” in the back of the school bus on field trips. I was with them all the way to Ill Communication then I drifted away and generally lost interest in the four years that passed before they released Hello Nasty. That being said, I was excited to see them if for no other reason than nostalgia and the fact that they’ve been such an influential force in music.

Surviving Sunday at Sasquatch (say that five times fast) was a matter of endurance. Polyphonic Spree were blown off the main stage by high winds and as the main stage stood quiet, many concert goers had had enough of the cold and the wind and headed for the exits. When the lights finally went out on the stage signifying the Beastie’s arrival, the crowd roared in appreciation. Soon Mike D was on the mic letting everyone know that they were going to warm it up and “burn this motherfucker down” and as they jumped into “Gratitude," it was like they were saying thanks to the crowd for braving the cold. All three of the Beasties were sharply dressed, Mike D looking like a young Bob Dylan in a tight blue suit, Ad Rock sporting a black suit with a red sweater, Ray Charles sunglasses and a fedora that made him look like Joe Pesci in Goodfellas, and MCA in an olive suit that would have been up to code for a high school history teacher. The fancy duds didn’t stop Ad Rock or Mike D from running side to side across the stage as they tore through “Body Movin’” and “Sure Shot” back to back. The energy that the Beasties brought to the stage was incredible, especially considering the frigid weather.

Further on in the set Ad Rock took the time to dedicate “Something’s Got to Give” to our current political leaders. Although the King Ad Rock wishes for "peace amongst the races", something tells me our folks in Washington are more the “Rhymin’ and Stealin’” type, or at least stealing anyway. As the show moved along I soon realized that I am a bigger Beasties fan than I gave myself credit for, as I knew just about every song they played. They weren’t just playing their recent tunes or tracks of the new instrumental album The Mix Up; they went back into the catalog for classics like “Pass the Mic” and the set closer “So What’Cha Want."

After a brief intermission the boys returned with a vengeance for a four-song encore that began with “Intergalactic” and ended with “Sabotage” and everybody had the opportunity to shout out all of there frustrations from the weekend — the ten dollar beers, the cold, and the delays — and sing along with Ad Rock Wwwwwwhhhhhhhhhhhhhhhyyyyyyyyyyyyyyyyyyyyyy!

Seeing the Beastie Boys live made me realize how good they really are. I think I had taken them for granted as I moved away from their music. Their artistic progression from a screaming punk band to the pioneers of rap rock to their newest manifestation as an instrumental trio is amazing in and of itself, but the thing that really brought it home for me is how they left everything they had out there on that cold windy stage. Even if they didn’t play “Girls” or “Fight for Your Right” for all my comrades on the bus.