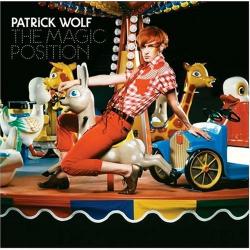 To call someone a “seasoned veteran” of music at the age of 23 might seem a little presumptuous, but when you’re Patrick Wolf and you’ve been making and writing music since age 14, you might actually be right on the money. Wolf plays pretty much any instrument that comes near him and in that like to write songs that are as complicated as they are catchy. Now that that Wolf has decided to take on pop music, he has put together The Magic Position, a collection of post-punk pop songs that sets him as, well, the Conor Oberst of British music: a unique talent with chops well above his age bracket.

Patrick Wolf has always been on the art rock side of the equation and has dabbled in no less than 16 instruments including but not limited to harp, clavinet, harpsichord, guitar, piano, autoharp, kantele, organ, mountain dulcimer, clavichord, harmonium, accordion, theremin, ukulele, viola, and violin. Heck, he built his own theremin before he was in high school. Now, there’s a guy who’s destined to be a musician. After a couple of more experimental and indulgent albums, Wolf has set his sights on pop music – albeit in a theatrical sense, putting him in the same league as the Divine Comedy, Jarvis Cocker, and New Order, fusing pop and electronic into a infectious cocktail.

It's impossible to start any review of The Magic Position without talking about the title track, possibly the most perfect pop songs of the year, rife with mixed instrumentation (strings, oboe, footstomps, you name it), disturbingly cheery lyrics ("It’s going to be a beautiful day/so do the bluebirds say/As I take your hand/and you take my kiss") and the catchiest chorus of the season; you know that if US radio wasn’t so obsessed with large-breasted female singers and Southern rappers, Patrick Wolf would be the anthem for the summer. If you only make it to that one song on the album, you’ve done yourself quite a favor.

Luckily, although not as thoroughly solid as the title track, the rest of The Magic Position is packed with pop songs that don’t sacrifice personality for accessibility. “Accident & Emergency” is a blend of Pet Shop Boys synth-pop and a Bright Eyes feel, maybe what you might have expected if Conor became cheerier and more enamored with Digital Ash from a Digital Urn. The aptly titled opener, “Overture” builds from a stripped down beginning into a neo-folk dance number, building slowing like dirty, modernized Pulp song, throwing in some clever commentary ("Was it worth all that war just to win?") Another one of the high points is “(Let’s Go) Get Lost,” a mix of synthesizer mayhem and playfully strummed guitars, almost like a less angular Blow song with Wolf’s much more animated vocals dancing across the whimsical melody.

It's not all about dancing for Wolf and when he slows it down, you get a great view of this theatrical side, such as on “Magpie,” a bittersweet piano-driven song. The same could be said for “Augustine,” which has more of a Neil Hannon/Divine Comedy feel in Wolf’s vocals and melody. “Enchanted,” as the song title might imply, is a sweet love song done in the classical, piano-bar style, borrowing a bit from Burt Bacharach and Frank Sinatra, creating a ballad in the true sense. The flipside is “The Stars,” which is a straight-up synth rock song, maybe more like the Postal Service or Dntel, riffing with a staggered beat and intermingled sequence lines, almost losing Wolf’s (and guest Marianne Faithful’s) vocals in the electronic din – yet somehow it all works together. Sometimes, those self-indulgent early 20’s moments come throw, like “Bluebells”, which might be a little too long and cumbersome for its own good. The album is also chock of full short interlude, less than two minutes long, that really don’t add much to the overall feel. They seem much more like little vignettes where Wolf can experiment even more – which, in this setting doesn’t distract too much, but it indicates that Wolf is still in the incubation period where he’s not even sure which way his music might take him (see Bright Eyes’ Cassadaga for an album where a young musician makes that decision).

The Magic Position is an invigorating mix of playful electronic pop and more heartfelt, almost theatrical songs that blend together surprisingly well. Sure, Wolf has tossed around the idea that he may never tour against after the fall of 2007 (and he’s even hedged his bets on that statement), but his third album suggests he might be on the cusp of something big, driving a revival in pure pop music that isn’t soulless and corporate, but rather a musician just knowing how write a song that catches your attention and doesn’t let go.