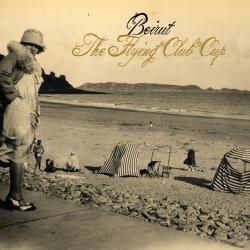 Every once in a while you realize you’re listening to a band that will become legend. That doesn't mean they’ll be filling arenas, selling ten million records, or even getting all the critical acclaim. A legendary band is one that will develop a devoted following, who will spread their love of the band by word of mouth, and ten, twenty years down the road people will still be buying their albums as they hear about the band down through the ages. Beirut is just one of those bands. They produce amazing albums in almost a stealth mode, and as more and more people hear them, they will realize the gem they have on their hands. The Flying Club Cup builds on the success of Gulag Orkestar and we’re left with one of the most satisfying albums of 2007.

If anything, Beirut is what we all wish could have come after Neutral Milk Hotel’s In the Aeroplane Over the Sea — a genre-defying album that is so infectious you wonder if you can board on an airplane with it. Beirut collects together so many sounds and styles into their music and blends them together with Zach Condon’s haunting vocals into little mini-operas that are completely captivating. The Flying Club Cup is a magnificent pastiche of sound that exposes its depth with every listen.

You can divide Beirut’s songs into two broad categories: full orchestral tracks and restrained pop songs. There can be spillover between the two, but Condon likes to live in a flourish or in a desert. “Nantes,” the album’s opening song, is just one of those songs that straddles both types, starting with a gentle, quiet synthesizer line that grows slowly into a menagerie of instruments, but never losing the playful melody. On songs like “Nantes,” it's hard not to notice the genetic similarities between Beirut and Talking Heads/David Byrne, except Beirut is much more open to delving into the sounds that inspired the band. This song ends up living between French 50s pop and Neutral Milk Hotel.

This sound is even more evident on “The Penalty,” where Condon’s evocative voice and a gently strummed guitar greet us, as if he’s performing in front of your streetside café. Equally stripped down at first but building into a Balkan gypsy sound is “A Sunday Smile.” Beirut’s ability to build tension in songs is a hallmark of the band and this is clearly evident on “Cherbourg,” the cousin of a “A Sunday Smile,” but with more pop sensibility mixed in.

There's such a diverse assortment of musical influences at play on The Flying Club Cup. In a songs like “Guymas Sonora” and “St. Appolonia” you can begin pick out the variety distinct cultures that Beirut touches: French, Balkan, Mexican, Americana and more. The song itself draws the listener in with its neo-contemporary sound, like the Decemberists on musical steroids. “Cliquot” is one of the standout tracks on the album, diverging a bit from the Beirut formula as Condon’s voice is more restrained (but no less musical) than on other tracks. The end result is a lingering and plaintive ballad of lost love that at the same time has a timeless and truly original feel.

I could go on to try to describe each track on The Flying Club Cup, but I almost feel like I have a lack of words to do it. Each song is a little universe unto itself that swirls around and scintillates the listener with the musical treats that are buried in its structure. The somber tones and dark textures of Beirut are perfect for the impending Fall and The Flying Club Cup will not leave your disappointed. Much like In the Aeroplane Over the Sea, each successive listening to a Beirut album peels away a layer to reveal more, but you never feel much closer to truly uncovering every nuance that are hidden in the sounds.