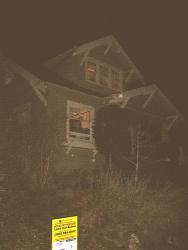 Opening with a montage of Seattle, Burn to Shine's forthcoming Emerald City edition is quintessentially us. The film's opening montage pieced together clips of places here and there — the I-90 bridge, homeless people at a bus stop, downtown hustle and bustle — all familiar, but not cliched street corners. Resting on the house where the video is set, we're treated to inside views of this charming dwelling as sound crews and camera teams set-up for the footage. The house is probably similar to many others set in outlying residential neighborhoods, its early 1900s construction featuring dark wood trimming and thick rafters, large windows filling the rooms with natural light, and built-in shelving tucked away here and there.

Like the other houses featured in the previous three Burn to Shine installments, this house was destined to be destroyed.

For those not familiar with the concept of Burn to Shine, the production team has these five rules:

The first three were shot in Washington DC., Chicago, and Portland. As with those, the Seattle edition featured songs by local artists. Curated by Benjamin Gibbard, there was definitely a collection of influential Seattle artists of our time, including some rising stars deserving of being mixed in. Set in the empty cavernous living room of the house, each band played a song, with numerous camera angles mixing in and out.

I was honored to attend a sneak peek event for the forthcoming film on Monday night, October 15, 2007 at Chop Suey. Surrounded by Seattle music luminaries, I compiled the following list of the performances that struck me during the film, how the video was shot, and bits of commentary (Big thanks to Sound on the Sound for the final track list).

I won't give anymore away; this is definitely a must-have for anyone who considers themselves a Seattle music lover. The final destination of the house, I believe, is supposed to be kept elusive until the final moments of the film, so I'll keep mum on that event as well.

Visit http://www.trixiedvd.com/ for more information about the previous volumes, and for information on when our hometown edition will be available.