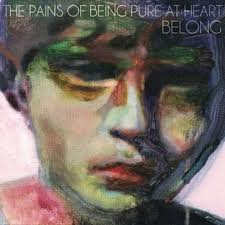 Pains of Being Pure at Heart

Every indie rock musical generation’s tantrum heartbreak purges out a band that people will resist based on the vulnerable obviousness of their name. But at the leaf pile-loving, milk-tea drinking, sunshine pop with grey cloud dimming Three Imaginary Girls HQ, a group calling itself The Pains of Being Pure At Heart is not going to be neglected for their “handle.” And that’s to our own own joy. For Belong, the new album from the collective led by Kip Berman and includes keyboardist Peggy Wang, bassist Alex Naidus, and drummer Kurt Feldman, is the kind of subversive sound candy that can pleasure our hungry ears all year long.

There is a new-found crunch to the ten tracks on Belong, which through its very-80s synth-squalls also rattles the memory of the big emo moments of 90s alt-mainstream bands you probably grew up on. Produced by Flood, mixed by Alan Moulder, who sculpted every humongous digital classic from Siamese Dream and Mellon Collie and the Infinite Sadness to forebears and successors by My Bloody Valentine, Nine Inch Nails, and PJ Harvey, it was a record-making marriage made for the history books.

“Belong” comes dancing in like a brisk little pop waltz about vows, but explodes in “hospitals and shopping malls” with hormones in a haze of pot-smoke driven sexual experimentation that just leads the anxious narrator back to his co-dependent. “The Body” is like the sudden uncanny onslaught of adolescent desire in song (“Look so hard in fish-nets and leather”); ecstatically gross and creepily intoxicating at the same time. My favorite track, “My Terrible Friend,” is about feeling dead laying in bed and taking what you’re lover takes. This is the cleanest sounding dirty album ever recorded, maybe. (Prince would have loved to produce it, I think.)

This album could be fucking huge, and its unashamedly blissful nods to “the Mode” (also worked on by those guys) and the straight-driving enchantment of bands like (mid-80s) OMD, will be giddily enjoyed by all kinds of missers-of-the-big-shared-pop-moment. Pop back in here next year and we’ll see what happened. Meanwhile, hey old farts! You know how great rock by Big Star or The Smiths would gleefully mix elements of timeless heart-shredding Motown, girl group, power pop, and folk-pop records into subversive statements of detailed daily downers you could drink to? And how when new bands revive 80s bands they tend to pick the wrong ones, the dull and shallow ones, or add nothing visceral to the tweaks and blips and bass burps appropriated? Well, this content is worthy of its form source material.

Sort of like how the Hernandez Bros. craft graphic novels about real life-like exciting punk characters who read comics, in comics, this is the neo-80s band that makes good on the substance behind the nostalgia. It is a soap opera that uses the format of a soap opera to be real, like an indie pop Sopranos or something. “No matter what you pray / It’s never going to take the pain away / Even if she stays / You knows it’s wrong. … You know she’s gone” (“Heart In The Heartbreak”). Yes, Lou Reed could have written those lines on the third VU album.

Yep, another one of those bands you want to hate because of the name, but will give you an album that will sink into your veins like sweet, sweet heroin. With all the transcendence and ambivalence that sentence evokes.