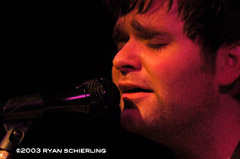 The show was good. Quite good, in fact. Gibbard opened with a cover of Donovan's "To Sing For You" (no doubt having recently watched the Pennebaker documentary "Don't Look Back," when Donovan sings the same song to Dylan), and from there transitioned into the Postal Service's "Brand New Colony." He played an assortment of greats ("Passenger Seat," "Photobooth"), new not-so-greats ("Crooked Teeth"), and absolutely fan-fucking-tastics ("I Will Follow You into The Dark" and a new song called "The Ice Is Getting Thinner") and a bunch of others, although notably nothing (I'll repeat that, NOTHING) off Something About Airplanes or We Have the Facts…. Yes, that's right, Gibbard had an acoustic guitar all to himself and didn't play "405".

What he did play at the end for the encore, however, deserves mentioning. He covered "All Apologies." On the piano. He said it was an honor to be asked to play it for a forthcoming movie about Kurt Cobain. Now, as anyone who knows me can attest, I love Death Cab for Cutie. I think they're an amazing, wonderful band. And those same people will tell you I think the same of Nirvana, but for very different reasons. But Ben Gibbard covering Kurt Cobain was like listening to an utter castration of all that makes Nirvana great. Ben's sensitive, innocuous tenor works so much better than any other voice for verses like, "I watch the patchwork farms slow fade into the oceans arms" (from the Postal Services's "Recycled Air," wonderfully done last night) but "All Apologies"? It was absolutely devoid of any impact, save for the brick wall of applause that came down from the fans there enraptured. (The most vocal of whom were most likely not even born when Bleach came out in 1989).

Great set, but for that encore, Ben, you owe us All Apologies.