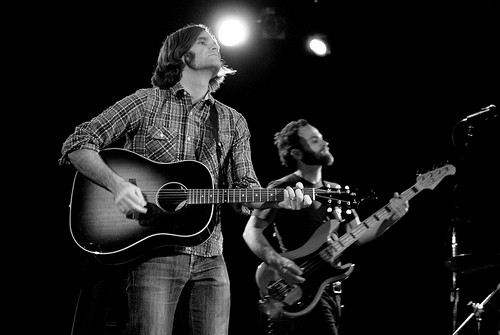 Mark your calendars, Ben Gibbard fans: on Tuesday, October 16th, Barsuk records will be releasing Former Lives, the very first full-length solo LP to be put out by the Bremerton, WA native. For as long as Gibbard has been involved in the music scene, fans have come to understand that he is not afraid to leap into new, unexplored spaces with other musicians — this has led to an astounding catalog of music that is rich and diverse in it's influences and sounds.

Fomer Lives has been explained by Gibbard as a collection of tunes that have not necessarily been the scraps leftover from his previous ventures, but rather songs of equal quality that merely did not fit into the flow and scheme of previously released albums. As he points out in a recent interview with Stereogum: "In the past whenever I've put out any solo recordings it's just been of a function of the time in which I was in. I'm a songwriter and that's my job, and with every record that we've made there would always be a couple of tunes that just didn't seem to fit in with the band."

Fans expecting a finely polished Death Cab for Cutie album might be a little surprised, but anyone with a keen interest in getting a closer, more intimate look into the creative mind of Ben Gibbard should be delighted — as this is shaping up to be an eclectic gathering of songs that have been years in the making. As Gibbard also stated, "I kind of like that the record is something of a mixed bag. The songs themselves are not all of a particular mode and they're not all about one subject, and they're not from one definitive era of my life."

Read the whole Stereogum interview here, and keep up with announcements at Ben's official site here.

{Photo of Ben Gibbard and Nick Harmer by Victoria VanBruinisse.}