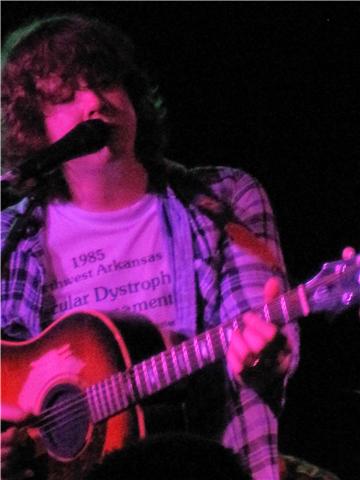 There’s one thing I’ve learned over the years; When Ben Kweller comes to town you go see the opening band too. He doesn’t mess around. He consistently brings great opening bands you’ve probably never heard of, but give them a chance and you might find yourself at the merchandise table buying their album. Jones Street Station was no exception. When I rolled up to Chop Suey on Monday night, there was a line out the door and by around 9 o’clock Jones Street was hitting the stage to an almost full Chop Suey.

Jones Street Station consisted of five guys, four of which were lead singers and one drummer who didn’t miss a beat even when a microphone stand fell on him. I was a little leery of four singers, but they pull it off flawlessly. They took turns singing lead and harmonized and sang in rounds; it was one of the prettiest things I’ve heard. The singers were skilled at their own instruments including keyboards, bass, banjo, accordion, a utility belt full of harmonicas, and a one of a kind mandolin, with a 1920s pick up held on with gaff tape and puddy. It was easy to see after only a song or two that this is a tight band and with a set up like that, they have to be. They play well and make it look easy.

I’ve talked to a lot of people who love “old country” like Johnny Cash, Willie Nelson and Merle Haggard but cannot stand “new country.” I think Jones Street Station is the answer. Not to say they are pure country, they’d probably be termed Alt Country, but they remind you of what used to be good. They are Americana, spitting up the truth, blue grass sounding folky pop and at times jazzy. They have romance, the kind that keeps you alive, referencing home towns, booze, love and the heart aches of life.

It was nice to see the crowd give them a chance and what a great reception for a band thats never even played Seattle before. After playing for about 40 minutes, they came upon their last song. They told the sound guy he could cut everything on stage. Then the five of them walked up to the front of the stage with an acoustic guitar and a harmonica and sang the closer “Tall Buildings.” Gradually everyone in Chop Suey fell silent, a hard feat to do for anyone lead alone an opening band who’s never been here before. Imagine this, the only sound was a baby crying and the five of them harmonizing, singing:

I’m not sure I’ll ever see something like that again, and that’s unfortunate.

Ben Kweller was up next. It’s always a pleasure to see Kweller live. Not only is he a great musician and executes songs perfectly, but he also possesses a school boy charm. It’s hard to describe except for you always feel like you’re seeing an old friend when you see Ben. He comes off sincere, like he’s really just catching up with some friends and jamming out on the side.

Kweller came on around 10:20, to a packed house. He’s out touring promoting his new record Changing Horses, an album with a country feel going back to his Texas roots. His band this time around consisted of a drummer, slide guitar player, and bassist Chris Morrissey (who previously toured with Mason Jennings). Kweller, himself, held down the guitar and piano. Ben got down to business opening the set with “Commerce, TX”, a song off his first album and an instant crowd pleaser. From there he moved on to new songs off Changing Horses and the place got lively. I wasn’t sure how the crowd would take the songs, but they loved it. He hit songs off of all four albums including “Walk On Me”, “Run”, and “Sawdust Man”. During his classic, “Falling Down”, he stopped singing and the crowd sang along, sounding like a children’s choir.

When he played the song “Sundress”, he faked the crowd out. The song starts slow and when it started to get upbeat instead of going for it, he went down tempo and threw in the slide guitar flare. It was funny to see the crowd start to jump up and then suddenly stop. Seeing Ben Kweller with slide guitar is like seeing Modest Mouse with Johnny Marr. They’re the same songs you know and love, but with a new enhanced feel to them.

After about 40 minutes the band stepped off and Ben was left to perform, “On My Way,” with his acoustic guitar and the crowd backing him once again. From there he switched to the piano and harmonica and jumped into “Thirteen,” probably his best song. The crowd was silent and if there was anyone one there who wasn’t getting misty eyed or who didn’t have goose bumps, then they must not have a soul. That might seem like a giant claim, but it is the absolute truth. After that the band came back on for slow song “Living Life.” In between songs Kweller updated the crowd reporting that he’s got a new website coming soon, that it was his birthday at midnight and that he will be playing Craig Furgeson on Thursday night (whether it airs then or not is to be determined).

They ended at 11:30 with “Penny On the Train Track”, and then after some crowd pleading, came back for an encore. When they came back Kweller spouted “How could I refuse you?” and began playing “Heart of Gold” by Neil Young, a nice treat for the audience most of whom seemed to recognize it. Then he closed down the show with In Other Words, said Good bye and walked off stage. What a way to cure a case of the Mondays.

-unknown ( I couldn’t figure this out what out, but oh boy was it a good one)

– Penny On the Train Track