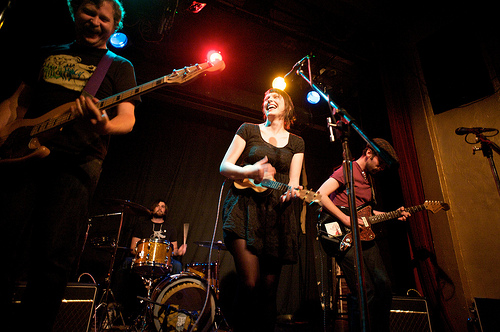 The best news of 2012 {so far}: Three Imaginary Girls presents Allo Darlin’ at the Vera Project

{Allo Darlin’ photo by Steve Louie from the Imaginary Flickr Photo Pool – taken at their October, 2010 show at the Rendezvous}

It’s barely 2012 and already we have news worthy of a shower of fireworks.  Imaginary favorite Allo Darlin’ are coming back to town!!!

It’s going to be a big night for everyone. For Allo Darlin, they’ll be fresh on the tour trail supporting their new album, Europe, set for release in April {which feels soooo far away for a whole album of new Allo Darlin songs}.  Sharing the bill is London, UK’s lo-fi indie-poppers The Wave Pictures who will be touring to support their brand new album, set to hit shelves in March.

For Three Imaginary Girls, the show is one of our big 10th anniversary events.  We’ve got a lot of things in store to mark this momentous occassion over the course of 2012, and we can think of no dreamier way to celebrate all-ages stylee than with Allo Darlin, The Wave Pictures and the Vera Project.

The show is going to be amazing! If you remember, their teeny tiny sold-out October, 2010 show was one of the most amazing nights of 2010 {if not the decade}. Allo Darlin’ write songs that speak to those who find love advice in the lyrics of a Belle & Sebastian song and even more impressive, they put on an amazing show that overflows with enthusiastic bliss and carefree revelry. When they joyfully share a song, it transforms the audience into a group of old friends, dancing and singing along.

Here’s a sample of the beauty of all that is Allo Darlin: “Tallulah,” a song from their forthcoming album, Europe.