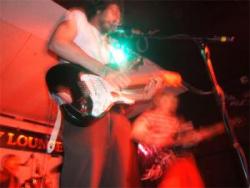 It's been a busy week here in the east! Let's recap.

Last Thursday night I made it over to new (and awesome!) Boston venue Hennessy's for a show featuring Tiny Whales, Big Digits, and Math the Band (sadly, I missed the first set by Crystal Understanding, but heard it was great). Three-piece Tiny Whales wore striped jumpsuits and played synth-driven pop songs with heavy beats. They were followed by the outstanding Big Digits, two guys who rhyme and dance up a storm over luscious laptop-supplied beats and melodies. Sample lyric: "So you think that you can model for American Apparel / But you get your fashion sense from Perry Farrell…" They're hitting the road soon, so go see them! Check their MySpace for dates. I will no doubt remind the shit out of you.

After that, Math the Band — who turned out to be one guy with a laptop — came on and did a set of what I dubbed "Psycho Karaoke," in which he scream-sang over reworked versions of such classic hits as "Semi-Charmed Life," "The Sign," and "You Shook Me All Night Long." Funny, yes; noisy, yes; perplexing, definitely yes.

Friday night, I headed over to Jimmy Tingle's Off Broadway Theatre for The Ego and The Oracle, a stage show featuring Jim's Big Ego and Andras Jones. Based on Jones' Olympia, Washington radio show Radio8Ball, The Ego and The Oracle is an audience-interactive revue in which audience questions are answered through Jim's Big Ego songs, interpreted by Jones and the band. For instance, audience member Elizabeth Lay was called up to ask her question: "Will I ever be famous?" She spun the wheel and it landed on the song "In A Bar," which the band immediately launched into. Afterwards, it was revealed that Lay indeed works in a bar, and Jones honed in on how her name may suggest a calling in the porn industry. Hilarity ensued. Other questions were more serious — at one point, audience member Ann asked "Will my oldest niece be ok?" and the wheel very nearly landed on "She's Dead" before clicking over to the next song. For the finale, Jim collected the questions that hadn't been chosen and ran through them all in song, repeating certain ones as a chorus ("Will I get a pet monkey?"). It was at times hysterical, inspiring, casual, and lots of fun, and I recommend it — the show runs every Sunday through June 17 and tickets are $15 (plus you get discounts to area restaurants like Redbones and Diva by bringing along your program. And if cheap ribs and Indian food isn't incentive enough, girls, Jones is pretty foxy.) Note to imaginary boy e: the Harry Potter question wasn't picked, but in Jim's finale number, it got quite a laugh.

Afterwards, it was over to PA's Lounge to catch a bit of Casper and the Cookies' set. I know a song or two by this Athens band and have wanted to catch them live for some time. Their psychedelic screen projections and platform boots were over the top, and the music was a little chaotic so I moved on to try to catch Boston roots/bluegrass act Three Day Threshold down the street at the Sky Bar. Sadly I made it in time to hear half their last song, but I stuck around for the final band, The Andwutz, an all-female act who seemed a little too old for their Hot Topic (anyone remember Rave?) wardrobes. They played some forgettable originals, and covers of songs like "In Your Room" by The Bangles and "Fight for Your Right" by The Beastie Boys. Their musical talent was questionable but they seemed a band that gets by on showing lots of skin, and the men at the dive-y Sky Bar didn't seem to be complaining.

Saturday night, Township struck again, this time at PA's. I've already told you how much I love them (but have no problem telling you again). Absolutely unreal. The hot room left drummer Greg Beadle soaked in sweat by the end of the set, which many people said was even better than their Rumble-winning set a week earlier. Following them were The Diamond Mines and Willowz, but I missed most of those bands' sets because I was schmoozing and boozing in the bar side of the venue. I've seen Diamond Mines before and though they're full of talent, it's just not my cup of tea.

Sunday night, I rested up for the coming week. Amazing Race, anyone?

Monday it was over to the Paradise Lounge for the final show by Nicole Atkins and The Sea. Her Boston residency sadly never got much of a crowd — chalk it up to Bostonians not being ready to rock on Mondays, and the Paradise being an off-the-rocking-path location. Nonetheless, Nic & co. (I can call her Nic now cause we're totally tight) put on another fantastic set, this time more upbeat than the past few. She played only a couple of songs from her EP, but the majority of songs were from the upcoming full-length Neptune City, which I'm having my own little igLiz-Cassadaga frenzy over.

Opening for Nic & the Sea was Rose Polenzani, a Boston folksinger whose quiet and mellow songs were lovely, and whose voice reminded me of Shawn Colvin, with a few hints of Rickie Lee Jones.

Tuesday night, I went over to TT's for Electric Laser People, formerly The Product™, who were playing their first show in six months to celebrate the release of their new CD, Straight Talk on Raising Kids (which I'll review for you soon). The band puts on a hell of a show, high on energy and singer/bassist Dan Paluska's slick dance moves. Songs include "The Makeout Song" and "TYCO" (which stands for Take Your Clothes Off), so you know you're in for a good time. From start to finish, the set was pure fun. Plus, they brought their Thingamagloops!

And last night, I started off at the Lizard Lounge for an early, free set from the Chip Smith Project, a newly formed four-piece old-timey folk band featuring Morphine's Billy Conway. They were highly entertaining, telling humorous stories between songs about their fictitious origins (read their MySpace "About Me" section for more on this). Most songs featured guitar, bass, violin and keyboards or banjo, so it was a nice and mellow start to the evening.

From there, I biked over to the Abbey Lounge for a show I'd been waiting weeks for: Madison, Wisconsin's Sleeping in the Aviary. I loved their record, Oh, This Old Thing?. Sometimes you see a band live and they just don't live up to the expectations you have from hearing their recorded works; not so with Sleeping in the Aviary. They exceeded my expectations, delive
ring a fiercely energetic set that included most of the songs off the album plus a few others. They hardly took a breath between songs, much like on the album, and singer Elliott Kozel danced around in socks while bassist Phil Mahlstadt hopped up and down. Drummer Michael Sienkowski impressively kept the raucous beats while singing backup, and on one song lead. The whole thing was wicked awesome, as we say here in the Northeast.

Incidentally, I asked Elliott how Maureen feels now (a reference to the song "Maureen" in which he repeatedly sings "Maureen doesn't like me anymore!"), and he says that she and Phil have patched things up. Awwww…

Next week, I'll be recapping sets by Antiques, Bon Savants, her majesty Amy Winehouse, and many others, so tune in! And let me know if you know of a show in the Boston area that I should hit.

Email me at [email protected], or message me on AIM: maginarybetsy