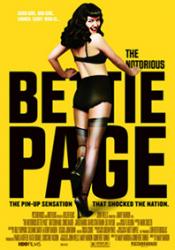 "Flattery is the devil's tool, Charlie."

Mid-1950s New York City, and men in business suits quietly browse a seedy Times Square magazine shop. One anxious-looking fella asks the even sweatier man behind the counter for something a bit racier — publications like Wink, Titter, Escapade, and Whisper obviously aren't doing the trick — and the shopkeep reluctantly shows him some fetish glossies featuring the now infamous Bettie Page.

You may be wondering who exactly Ms. Page is, or was. I really didn't know myself before The Notorious Bettie Page, a new biopic by director Mary Harron (I Shot Andy Warhol, American Psycho) about an endlessly fascinating pin-up icon and an era of tight-assed fear in American politics. It's provocative, stylish, and fabulously entertaining.

After a brief glimpse of a problematic upbringing in 1930s Tennessee, we follow Bettie (Gretchen Mol, surprisingly brilliant) as she makes her fiercely-banged way to the Big Apple in 1949, then dismally attempts a stage career and forays into increasingly kinky photo modeling work. Mol's never been so good, and the period-nuanced acting is marvelous all around, with supporting players like Sarah Paulson as renowned photographer Bunny Yeager, David Strathairn as staunch anti-indecency senator Estes Kefauver (the Oscar nominee seems right at home in a 50s-set black-and-white film about government corruption and censorship), and Lili Taylor as the coolest Thelma Ritter-esque pornographer you could ever hope to know.

Harron's mix of visual textures — stock location footage paired with new B&W, grainy 8mm skinflick shots, and occasional bursts of tantalizing postwar color — makes for a story as spectacular as it is intriguing. There's also soundtrack music by Peggy Lee, Julie London, and Artie Shaw to keep the proceedings deliciously old-school. The film's remarkable sense of detail works as a kind of tribute to the campy wistfulness of that era of American cinema.

A perfect way to present Bettie Page's story, which is really as much about the 1950s as our 21st-century reflections on the decade. Some may complain that the film stops short of Bettie's post-porn life: she found The Lord, went to work for a Christian organization and is still, in her 80s, alive and kicking. But as the melodrama-flavored final scene faded to black, I was thrilled to find myself seduced and amazed by this whips-and-all take on a history-making sinful saint.