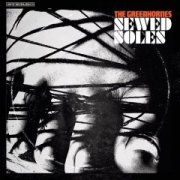 I was put off by The Greenhornes at first. Guitar player Craig Fox's vocals seemed fairly insouciant, like spat out phrases to add the right skunk to the flagrant garage rock fumes his trio made, lilting within the rollicking splash of drummer Pat Keeler and bass player Jack Lawrence. His oil-stained-carport-littered-with-burning-butts riffs were perfect, but then maybe too perfect. Sure, their beat menace had bite, but casual listens were unrewarding.

So maybe I wasn't as thrilled to receive this nineteen slice sampling of album tracks, seven inchers, and extended plays and tunes from assorted places like The Sopranos and the movie Broken Flowers.

It's actually the song they contributed to that superbly deceptive Jim Jarmusch film, There Is An End, with Holly Golightly guesting on lead vocals, that got me to stagger more closely to their smoldering oil-barrel fire. The chilling perfection of that creepy noir-cocktail set on repeat made me listen more to the vicious stormers surrounding it, such as "Shadow Of Grief" and "Shame and Misery." These are twisted tales of roadhouse romance gone bat-shit violent, of hope smashing on the pavement behind the bar like keys lost from a drunken hand.

It started to make sense: the dark-circled eyes above Fox's crooked smile, the almost undetectable froth at the corners of his mouth, and mordant observations not unlike his friend and collaborator Jack White (The Greenhornes provided the music for the White-produced Loretta Lynn record Van Leer Rose). It's only the surface that seems set with the smooth duplicity of comrade Brendan Benson (who produced the record). Fox is the perfect third part of their creative Detroit triumvirate, between the raw-rock of the former and the sinister sweetness of the latter, as can be felt to the spine when "Shame & Misery" swells up on the chorus, barreling down on your chin like brass knuckles in an alley brawl.

This isn't the kind of 'power pop' you want to hear bouncing up and down at an all ages matinee. I'd rather be jacked up on pink hearts, saturated with weed smoke and lager, punching some guy near the front of the stage. Now that's 'power pop'!