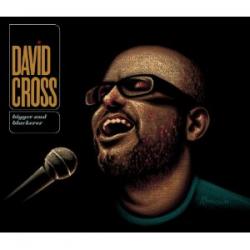 Do you know a David Cross? Sometimes I think we all must. He’s a really smart guy in your social circle (usually tied to the music scene) who fights with depression and being a drunken jack-ass, usually has the shaved head and National Health framed glasses, showing both a feather-touch sensitivity and inflamed sense of outrage when someone blindly passes along a notion.

A real “David Cross” isn’t just pissed off and double-edged resistant, though, he’s usually capable of delivering the most devastating, transgressive, vicious, and wild joke about something completely inappropriate. His morbid fascination with his and others’ cruelty can be deflated by one cathartic guffaw at the expense of our own blind, insane, reckless way through a pretty awesome place called earth. Where crack babies, gay bashers, mean cops who think they’re cool, and especially the religious just crap it all up.

Cross is the king of the socially conscious jeremiad, a classically necrotizing jester who uses his third album (still on Sub Pop) Bigger And Blackerer to confess his own love for watching the TV show Intervention whilst bummed out on Vicodin; mocks rehab and then mocks audience members mocking the desperate need for rehab by laughing about it in a way that rubs him wrong; admitting he loves to drink but casually jokes about hitting his pants in this state when taking his pooch for a walk; the utter ridiculousness of pedophilia (“You have skin like alabaster?” “WHAT IS ALABASTER?!”); “I Can’t Get Beer In Me,” about the de-evolutions made by the Coors company on behalf of the utter fucking morons who must be drinking it (title refers to its recent “widening” of the hole on top of the can so you can “get more beer in you faster so you can start hitting quicker”); whether or not something as not funny as date rape should have a UK ad campaign saying that you shouldn’t drink too much or “you might do something you will more than regret” (how can you “more than regret something”? Become so in denial you’re somehow proud of it?); and at least a couple of moments that feel like a hot poker in the entrails (license plate with “NGR LVR,” I’ll just leave it at that). Was that funny? Yes, because in a way it scares the shit out of you someone can crack up about it and crack you up about it but it’s so wrong. Oh, speaking of scary: Cross’ new favorite sub-genre of porn, exemplified by My Ass Is Haunted, the new combination of soft core and slasher films. He’s not making this up, but I’d rather hear him riff on these movies than ever see one.

Misses: Not too many on the album, except at times a good chunk of proselytizing comes before any sinister guffaw. And Mormons and Scientologists are satirically passe since South Park skewed them so well, right? Well, maybe not, they’re still getting richer than hell on really dumb ideas and have horrible political influence in a country that should have legalized gay marriage and pot smoking at least three decades ago.

Bigger And Blackerer begins with a fake show tune (well, it’s not fake, it’s really a hammy show tune, but it meanders off into jokes about cosmonauts where Mike Douglas never went before) and is a collection of material from two Boston shows at the Wilbur Theatre. A Boston crowd is good for Cross because it will give him love but won’t take a whole lot of shit. A nice eye to eye feel, as opposed to the soft indie guys who get slaughtered on Patton Oswalt albums (not that I don’t love the hell out of those moments). It was shown on Epix (whatever channel that is, I gave up cable due to news reports like one called “Why Animals Attack!”) on April 10 and is available both as this little old CD and a DVD. Like his long-winded, audience-baiting audio version of I Drink For A Reason (half of its multi-disc set filled with insults for people who purchase books on tape; it’s actually some of his best work in that format, bitch-slapping lazy consumers like me in my own home, person to person), the various formats have material unique to their own release. Like those Kiss solo albums with all those different paintings of the band on their covers, but each had different songs. Wow.