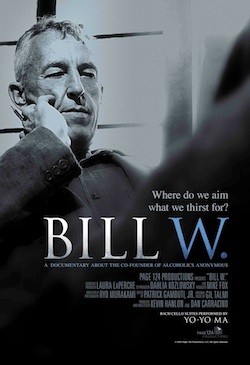 Bill W.: A fascinating doc about the A.A. founder

"Bill W." was a synthesizer. A human synthesizer, that is, someone who took an analogue expression and somehow craftily made something needed out of it for the world in a pinch. Something that was there before, but not easily accessible without a lot of training or experience on the part of the person who wanted in. He put together ideas about how we need so desperately to talk to each other, to earnestly fellowship in equality, to have secret societies where he can be utterly humble and deeply admit our weakness.

Like his fellow 20th century replicant of addiction-prophecy, "Wild Bill" Burroughs, their raspy, patrician voices start off in bomb-bursts of declaration ("laying it all outh there, no matter what you think of me") then likewise trail off into momentary flickers between naked universal connection and alien observation. As if they're both astronauts floating in a glass bowl spaceship above time, growing sadder and sadder at humanity (their own and in general) by the minute. They both made many mistakes, they both owned up to most. But the ideas they put together — these are inside everything you are, make, and do now. Bill W., however, dove from the limelight, and would never have endorsed anything resembling celebrity. He also deeply changed a large chunk of humanity, more than just expressing ideas about it.

William S. Burroughs has nothing to do with this documentary about the founder of Alcoholics Anonymous, don't be deluded. But this is about the past, and the future, and seems like science fiction, which Burroughs wrote. What's even more astonishing is that the Bill we're actually talking about created a utopia, which serves citizens kindly to this day — not a bitter-land of ancient impulses repeated into madness and murder. Bill W. is about William G. Wilson, who put together a movement in post-Depression era American based on the mathematics and manipulations he learned whilst a stockbroker before the big crash of '29, and oh yeah, his tragically driven desire to get well.

He had been a war vet, and gone through the death of his first love, and who knows what sort of rabid boozers were lined up in his genes. He used his own will to fight his drinking through a period in which doctors were ripping the strands of brain right above the eyes with icepicks in many asylums where drunks were stacked, shocking them with electricity, rendering them far more hopeless than when they came in. Something needed to be done, and William G. Wilson became the person who helped make that happen — as he would put it, to make things better.

This documentary shows the costs of such a mission. There are loving friendships here (his ties to Dr. Robert Smith, a surly surgeon who first came over to "Bill W." and his coordinated study of understanding the drive of alcoholism, against all everyday logic). They seem forged in the basic human need to relate and unburden, and in the complex nature of the disease. But there is also a long-suffering wife, Lois, who stayed with the AA founder from his days as a raging drunkard to his autumn years as a hallucinogen-taking philanderer. This is a bruised knees-and-all biopic, with waves of adoration expressed for the tall man who took the good intentions of the original Oxford Group and infused them with the truth of our absolute helplessness. Expertly paced and researched by Kevin Hanlon and Dan Carracino (writers, directors, producers) are not in A.A., and it is not endorsed by the group in any way.

Bill W. is a meditation on ideas into action, on power for the good, on finding out what human beings actually need to survive when they can't help themselves. It is not nearly as depressing as one might imagine; there is the creative energy displayed here that reflects how some people in the film remark that Bill W. is one of the greatest figures in recent history. If you're curious how something can be so helpful without much central organization, life-changing whilst working away in the shadows, based in the sort of honesty we spend most of our day avoiding, this is a great film to see. Bill W. called himself an anarchist, and he seemed to bristle at the worship given to him. Like any great drunk, he could argue his way out of health in a heartbeat. All he wanted was to communicate with a fellow drunk how goddamned hard it all is, and get the truth back in return. It's a good religion, and like all of them, it has its fucked up moments. But it's meant life for literally millions of people, and this movie is a start to understanding why.