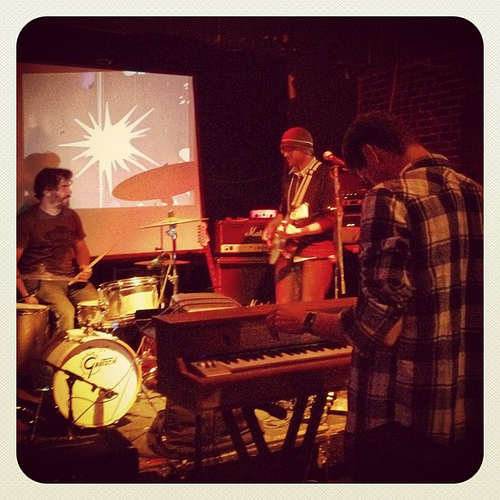 Okay, maybe “around Seattle” is a misnomer, as it was really “around Capitol Hill”. Anyway! On Monday {9/17}, I met up with Tierney, Jason, (tour drummer) Cash, and Sammy near The Comet Tavern before their show, and naturally, they were all hungry.

My first thought was Bimbo’s—but a claim was made that they were all “kind of burrito’d out…” and so, I suggested The Honey Hole: king of the deliciously huge sandwiches. Even though I lamented the loss of The Spicoli from the menu (say it ain’t so, Honey Hole!), I found a sammich I loved, and so did everyone else. And there was much rejoicing.

After dinner, I rounded up the coffee drinkers and took them over to Stumptown (don’t get mad at me, people, I KNOW Stumptown is a Portland roaster, but it’s my favorite place on the hill to grab coffee!) for some yummy lattes. They all agreed I hadn’t oversold it (thankfully), and that it was really, really, really good. And there was much rejoicing—and laughing over the giant duck decoy they use as a restroom key holder. 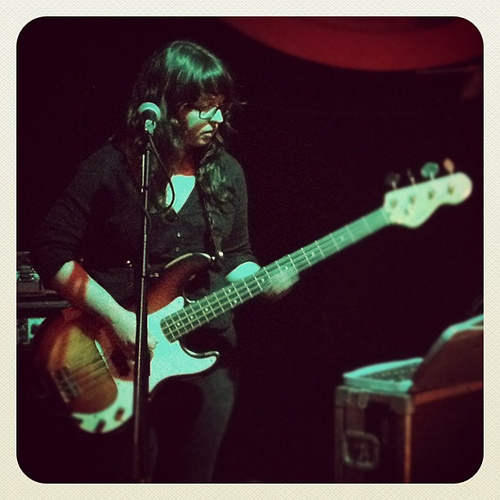 Then we headed to The Comet to get ready for the show—a show, which I didn’t actually believe, would ever happen! The Pauses, all the way from Florida. Whooooaaaa, you guys. Whoa. Before show time, I got to discuss my favorite thing with Jason, HORROR FILMS. I’m sure we were boring the pants off of Tierney and Sammy who were sitting next to us, but man, that was fun.

Oh! Hey! What about the show? Well, as expected, the turnout for a Monday night show as minimal, but still pretty decent considering. The openers, Best Band from Earth, clearly had their own, very enthusiastic thing going on, and gathered a few dancers near the front of the stage during their short, mixed rap/electronica/voice F/X/guitar and keyboard set. I’m sure they’ll gather some more fans in no time.

The Pauses took the stage second, with their “Interact-O-Vision” set-up, which was awesome to see live. Basically they put up a screen behind the drummer, and members of the audience can control the images using the keys and other controls on a sweet-vintage keyboard. It took awhile for people to get into it (I manned it for a few minutes, but I got too self-conscious and gave it up shortly), but after a few songs, there was much participation—and of course, rejoicing.

Seeing these guys live was SO AMAZING. I’ve listened to A Cautionary Tale so many times since I discovered it last spring that I know almost every word by heart, but it can’t really compare to actually seeing them play in front of me. Bonus goodness: the lovely Jen Wood joined Tierney on stage for their cover of “You Belong to Me”! YAY! So great.

The Black Tones took the stage next, and I was kind of blown away by lead singer Eva’s powerful voice, and the ROCK that they brought. That was a lot of rock. And it sounded really good. REALLY loud, and really good. My rock-n-roll loving heart definitely responded. That much I know.

Unfortunately, by the third song I was kind of hitting the sleep wall, so I had to take off before last-minute addition The Januariez, but I hear they’ve got a very grunge-y sound goin’ on. I did get to meet lead singer J-knee January pre-show, and she was darling. Maybe some time I’ll actually get to see her sing, when I’m feeling less…old. Or something.

Anyway! The Pauses told me they’d be back someday (YES!!!!), so now I gotta figure out what part of town to take them to next.

Where would you take one of your favorite bands for food and drinks?