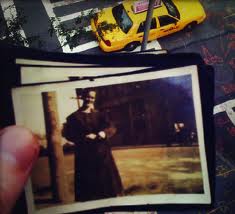 A Bird In The Opera House

Nick Jaina is a very accomplished and demiurgic Portland, OR-based singer-songwriter whose lyrically romantic scenarios luxuriate in diversely orchestrated carnival folk-pop. His stately and quietly startling new album A Bird In The Opera House reminds me of when I was a teenager and brought home armloads of classic folk, rock, and even classical LPs from the library. I would spend lazy afternoons flicking between Simon & Garunkle and collections of courtly love music, sampling the poetic plumes of spoken word and instrumentals on The Amazing Adventures of the Liverpool Scene, and winding into romantic mesmerization with the ballads of bands like Jefferson Airplane.

A Nick Jaina record is just as rich in acoustic-based tapestries of sound and seriousness of mood. It may just be a sublimely melodic lead vocal and sweep of old strings, but tracks like “Days In My Room” and “Asheville” are meant to carry you into a more lived-in, yet more literary, world of indie rock song-craft. He is an unusual artist in the chamber/roots underground, due to higher level composing and arranging skills, a really sophisticated playing sensibility, and a Stoically mature confessional outlook in the songs.

A Bird In The Opera House is just as mindful, timeless, and tuneful as his previous releases WOOL and The 7 Stations; though an infectious anthem like the latter’s “Maybe Cocaine” is absent this time out. There is a certain overwhelming softness and grace to this album that pleases me, though sometimes I’d like to feel a little bit more danger in the peaceful dusk of sound (not that the lyrics don’t poke: “I Don’t Believe You” stirs up more than a little pleasing agitation).

He’s busked in front of the New York Stock Exchange, encouraged audience jamming along with his seven piece band weaving intricate but resplendent drapes of sound, and poured himself into highly detailed collections of new work that transcend the conceptual limits of most full lengths. Don’t miss him live, and know that if you pick a copy of A Bird In The Opera House up you will be bringing home a world of stories, and enough layers of great playing to float in for a lifetime. Sort of like a bird in an opera house.