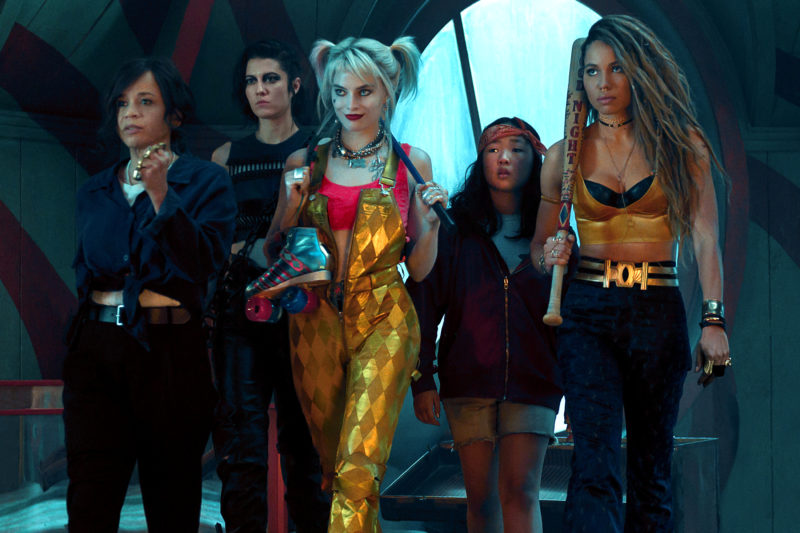 Birds of Prey and The Fantabulous Emancipation of One Harley Quinn

I can finally forget all about Suicide Squad (TBH, I mostly had already) now that we have a proper fucking Harley Quinn movie. Birds of Prey and The Fantabulous Emancipation of One Harley Quinn is a big, sparkly gem of a comic book action movie – and watching Margot Robbie inhabit Harleen Quinzel in this version was pure and absolute joy.

Birds doesn’t completely reinvent Harley’s origin story from Suicide Squad, but it still serves as a rebirth for of sorts (hence that extra long title). After being dumped by Mr. J, Harley indulges in a drug and alcohol binge at Roman Sionis’ (Ewan McGregor) club, which results in one of my fave scenes in the film: Sionis’ driver calls Harley a dumb bitch; she counters by breaking his legs with a jump and saying in reply, “I have a PhD, motherfucker!” Though irritated, Sionis lets her go because he believes she’s still under the protection of The Joker.

Soon after, Harley makes a huge, fiery mistake by stealing a propane truck and crashing it into the plant where she took the leap into a vat of chemicals to prove her love and devotion to the clown prince. That explosion activates a long and steady line of criminals who want revenge against Quinn for past grievances – essentially now that she’s a single gal, she’s fair game, because who would be afraid of a woman without a big, strong (insane) male protector?

Each member of the eventual Birds of Prey gets their own introduction, with lots of time shifts jumping back and forth because hey, Harley’s an unreliable narrator (which is PERFECTLY in line with her character and I LOVE IT): Black Canary (Jurnee Smollett-Bell) is a captive songstress at Sionis’ club; The Huntress (Mary Elizabeth Winstead) is an heiress turned assassin seeking justice for her slain family; and Renee Montoya (Rosie Perez) is a hard-drinking police detective who keeps getting screwed over and dismissed by her male partners — and also her ex-girlfriend, who works at the DA’s office.

Even with all of those complex, interesting, and kick-ass women on screen (AMEN! I SAID AMEN!), this is still very much Harley’s movie. We get to see her take down several groups of men who are much, much, MUCH bigger than her, and all of those scenes are incredibly thrilling. There are so many good fight sequences, and I was LIVING for the part where Harley gets caught in a snowstorm of cocaine and sniffs some up in order to fuel a super-powered attack on the criminals spraying a sea of bullets at her.

What brings her together with Canary, Huntress, and Montoya is Cass (Ella Jay Basco) – a young girl who lifts a very valuable diamond from Sionis’ henchman Victor Zsasz (Chris Messina). Once Roman tips from toxic man in charge to full Black Mask villain mode, the women have to team up in order to protect Cass, and themselves, from a mob of angry assassins.

The combined fight scenes with the whole group are even more thrilling than their individual scuffles, and I found myself reacting with laughter and cheers each time they dispatched another man — especially during a big moment for Black Canary.

But while it’s great to see Harley playing well with others; let’s not forget that she is a villain – not a hero – something that this film does a very good job to remind us of. She’s gonna do evil stuff, and sometimes (but only sometimes); she might feel kinda-sorta-maybe bad about it. She’s also gonna do it in her own punk-rock-glitter way. Don’t worry; the other three have that whole hero bit covered, and hopefully we’ll see a sequel soon!

One last thing I want to mention is just how fucking perfect both Ewan McGregor and Chris Messina are at being entitled, douchebag pyschopaths. THAT SCENE with Roman showing off his art collection (including a life-size statue of himself) to Canary is a goddamn gem, and Victor Zsasz has never seemed more unsettling. Those two should just play comic book villains from now on, forever and ever.

Anyways I highly encourage you to see it – and stick around through the whole credits for a Ferris Bueller-esque scene with HQ herself. Also: ALL HAIL Cathy Yan for directing the whole amazing thing with her awesome female gaze.

PS: Bruce the Hyena is ADORABLE and def. needed more screen time than he got.

{Birds of Prey and The Fantabulous Emancipation of One Harley Quinn opens in Seattle Feb. 6 and is playing pretty much everywhere in the city}