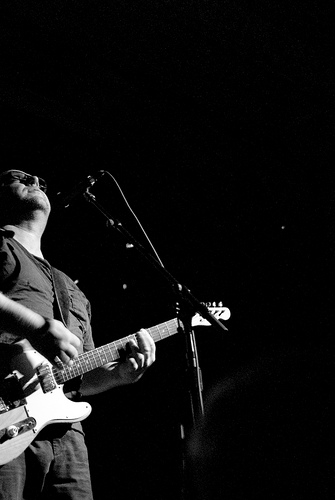 Black Francis at the Triple Door: A bona fide, yet refined, rock show

The artist formerly known as Black Francis then Frank Black and now Black Francis recently made a stop at the most gracious venue in all of Seattle. Actually, I was worried that I’d be too comfortable in my cush booth seat and refreshing climate controlled room and therefore, unable to fully bask in all that is dark, confrontational, and sinister in my long beloved Sir Black.

As I sipped on my fancy infused cocktail(s) and admired my table of spiffed up friends around the beautifully (and extremely flatteringly) lit table, I wondered if this could possibly compare to the first time I heard Black Francis (then Frank Black) break into “Wave of Mutilation” two feet from my squashed-up-front self at the Showbox. It turned out to be one of those bliss-filled moments I have cemented in my memory as one of the few times I thought I would faint from delirious euphoria. Tonight, as I looked around, the crowd was all calm, cool and collected (as well as orderly and well-dressed). How could the communal level excitement possibly peak to the level deserving of “Holiday Song” and “Where Is My Mind?”.

My fears were quickly squashed within seconds of Black Francis taking his spot front and center on the beautifully (and extremely flatteringly) lit stage. Perhaps it was that my internal ecstatic meter jumped into overload, but I swear the place blew up with overjoyed fervor and a couple people even started to give standing ovations. Black Francis himself remarked how swank the venue was by exclaiming, “I feel like Ricky Ricardo. This place has class up the ass!” confirming that he was equally charmed and surprised by his surroundings.

The stage was minimally appointed so that our full attention was on the object of our adoration: The man and his guitar, with occasional hitting of the harmonica stand (he had four or so differently tuned harmonicas at the ready), and a pedestal to stage right with an unopened bottle of champagne. 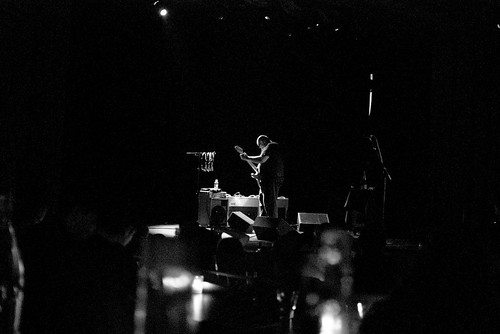 We all sat on the edge of our seat as Black Francis made his way through the set. A fellow who has essentially released a new record every year since he started his recoding career has a lot to choose from when putting together a show — and we all have our pet songs which we hoped made it through the lottery process and onto the set list. Would he pull a song our two as far back as his first solo album, Teenager of the Year? Would he include anything from his newest endeavor (with wife Violet), Grand Duchy? And dear lord, could we even hope for a Pixies song or two?

To the delight of all of us in the room, we got most of the above (see below for complete set list). He started off with a classic Frank Black hit, “Los Angeles” which pulls on both his flourished folk (most evident in his rendition of “I Burn Today”) and sinister (“Holiday Song”) personas. By the time he reached his eighth selection, “Velouria,” we were putty in the palm of his hand, as evidenced by the flood of screams from the cordially seated audience when he hit the first chords of the song. Black Francis obliged us by beefing up the evening’s version with a beautiful dramatic refrain of “we will wade in the shine of the ever” enhanced with haunting slight reverb and a singular intensity in the vocals that stunned us into silence and left us haunted to our core. 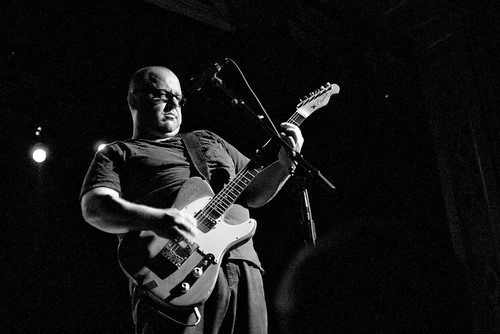 A few songs later he bestowed “Nimrod’s Son” complete with the jarring and pointed “You are the son of a mother fucker” — a line so effortlessly powerful you can’t help but sing along, with pumping fist like you’re a grounded teenager seeking a refuge from suburbia. Did it cheapen it when, after the song, he remarked “I am not sure what that song is about, but everyone seems to like it”? I think most of us just felt like we were in on the inside joke.

About two thirds through the set, he admitted that he had gotten all the songs with tougher lyrics out of the way, so he could allow himself to open the relished bottle of champagne. As a gal who has been known to buy Korbel by the case, I can appreciate the special expertise necessary to expertly handle the uncorking of champagne mid-show, on stage without overflow spillage, or head injury. 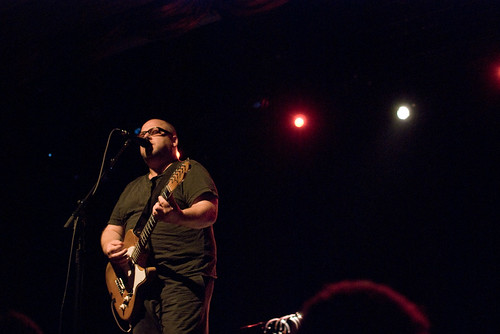 The evening’s 28-song set neatly melded of his id (Pixies), ego (Frank Black / Frank Black and the Catholics) and super ego (Black Francis) into a seamless set pulling from all over his career — sharpening his solo material and putting his refreshed stamp on Pixies staples. I’ve often felt that he spent the first part of his life as Frank Black trying to establish that he wasn’t just the guy from the Pixies, and to do so he was driven to prove that solid guitar lines and music theory could be just as important as Alfred Hitchcock guitar hooks and sultry cryptic lines about slicing eyeballs and mountains on Mars. He took the stuff that made college DJs name their radio shows after Pixies song titles and transformed his creative efforts to respectable vignettes culled from encyclopedic research.

Over time, as he has progressed from Frank Black back to his inner Black Francis, he offered tracks like the evening’s jagged and seductive screamer “Tight Black Rubber” to remind us just who we’re dealing with. By the time we made it to the last song, “Where Is My Mind?”, the audience was joined in an echo of “Wa…ohhhhs” and I saw more than one group of guys scrambling for their lighters to confirm we had just experienced a bona fide (yet refined), rock show.

No matter what his name, one thing that has never been in doubt is that he is the mastermind behind one of the most important bands of our generation; no matter how many Pixies songs he plays, he’s a force to be reckoned with.

{At this time someone yelled a request for “Bailey’s Walk” (a Doolittle-era b-side) to which he responded, “Thanks for reminding me I have to relearn that” and then mumbled a quick sidenote that his old band will be touring to commemorate the 20th anniversary for the album Doolittle and so he’ll need to relearn it for that. Seattle will get two Doolittle Anniversary shows — November 12 and 13, 2009}

*I don’t remember hearing this song – this might have been when I had to run to restroom {see aforementioned fancy infused cocktail(s)} — but when I checked my set list notes against the internet, I found this web-ster’s recap of the show which included this song. Well done!

More photos of the night with Black Francis are on the Hot Avocados Flickr.