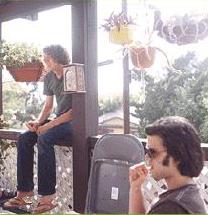 Did Black Dice form out of members of other bands or was it a bit more biblical, “And then there was Black Dice”?

Eric had been in a lot of indie-pop bands all thru high school, and had already toured a few times. Likewise Hisham, he had always been in bands throughout high school. Bjorn had never and has never been in any other band. I joined in 1999, after playing for 5 years with a post-HC band called T-Tauri from Colorado and LA.

When you first started making music there seemed to be much more of a hardcore influence. Was there a moment when one of you or Black Dice collectively said, “Hey how about…”? The difference between the untitled 10″ CD on Troubleman Unlimited and “Creature Comforts” is staggering. Was this something that just happened or was it a movement-a conscious effort to change your sound?

It was both a conscious effort and it also just sort of happened. The thing to keep in mind is that between the TMU 10″ and CC there’s like 5 years. A lot of bands don’t even last that long. Also we put out probably 6 or 7 releases including collaborations and EPs in between them. So obviously, as a hard-working band, I think one should expect some degree of change in the sound.

What/who are the group’s biggest influences?

Do you compose/structure pieces or do you freestyle when you enter the studio?

We heavily structure the songs, they are not improv at all. We do jam around in the studio sometimes, but have found so far that yields some slim results. Mostly we write a song for weeks or months at a time, and constantly edit out the pieces we’re not into, until we have a fairly streamlined piece.

We’re by no means out to change the way people listen to music, I think people should be able to use our records the way they use other bands’ stuff: y’know getting ready for work, getting hyped up for going out, settling in to chill at home, whatever.

You’ve been together since 1997 (Yes?) and it is tough to hold any project together for more than five years. Many bands fall apart around the year mark. Black Dice does not put out very accessible music (although your work with Usher was tight!) does this make it more or less difficult to keep going?

Yeah it’s a definite struggle to keep it together at times. We work really hard, and have at no time to come anywhere near supporting ourselves financially with the music. But we’re starting to get some respect, and that goes a long way, and it seems people are really starting to get into the music. But it is tough because NY is a tough place to live and work and be creative on top of it all. But obviously, its something we hold really dear to our hearts or we wouldn’t have put in all the time. So it’s its own reward I guess. But we all have a bunch of other stuff we do when not going gung-ho on the band.

When you tour, do you stick mostly to the two coasts?

No, I don’t think it’s weird at all that people don’t like it. It is some challenging stuff to get into, and I can see a lot of people just not being into it. We do stick to the coasts a lot, but have definitely put in some years of playing a lot of Midwest places too as well as the SW and the South. But until recently, it hasn’t been financially feasible for us to play the middle of the country. This tour we just wanted to keep it short, but maybe next time, we can branch out to some middle areas. I’d like to do CO again, that’s where I grew up. Our only show there was a legendary disaster — it was at a sports bar!

Have you ever discussed trying to freak people out by putting out a pop record or some type of more traditional rock sound?

For a while we were kicking around the idea of doing a covers record, with like some Credence songs on it, but that didn’t get real far. Usually we’re pretty wrapped up in the major projects and don’t have time to indulge ourselves with this kinda thing — not to say it can’t be amazing: we were just checking out Camper Van Beethoven‘s cover LP of Fleetwood Mac‘s “Tusk” LP — amazing!

What type of direction do you see the band moving towards next or is that a very stupid, rigid question that would be the antithesis of what Black Dice is?

No, not a bad question, just that no matter what we try to do, it always has a certain life of its own, composed and limited by our resources musical and otherwise. So its hard to say. I always think we’re on the brink of our big breakthrough to a big audience, then we come up with the most abstract stuff yet. So its hard to say.

What other artists, right now, are really making you say, “Wow!” or “Golly!”?

There’s a lot of cool stuff around — I think Hip Hop is the only really vital pop music going and a lot of the biggies we’re into: Jay-Z‘s “Black Album“, the Kanye West stuff, Timbaland, Neptunes — There’s a lot of great indie bands around now too: Wolf Eyes, Erase Errata, White Magic, Animal Collective, Blood On The Wall, Gang Gang Dance.

I think it’s a good time for American music. The world’s in upheaval, and I think that makes music more relevant than in a more peaceful time. It gives people a way to get away from all the literal and factual type thinking they have to do all day long. A little bit of fun on the way to work or whatever.

Is Black Dice political at all?

I think making abstract abrasive music and presenting it in a populist context such as the rock club, or LP format is somewhat a political act, though obviously not our first aim. And it has no direct relation or position to say a particular issue such as gay marriage, or the War on Iraq or what have you. So no, there is no direct literal correlation between our music and concrete political issues. And we tend not to play political events for largely practical logistical reasons, though we have played benefits for more localized causes that were close to our daily lives. But I think its great that bands use their public image to make a stand for certain things. I don’t think its naive at all for artists to align themselves with politics, and if the art itself is as challenging as the political position, all the better.

What is the biggest misconception with Black Dice?

People tend to think we’re an improv act. We aren’t, and we often get asked how we write our songs. I don’t even know really how we do it. It’s different every time, and so is my answer to that question. Still trying to figure it out.