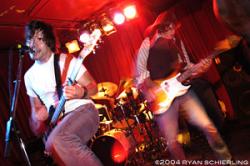 Careen, with the Jeunes

Performing midway through a mid-week set at Chop Suey (with Arkade, the Jeunes {see below}, and Tourist), the five guys in Careen came up I-5 and brought several howling fans with them.

My first thought was that Careen sounded like an NME "band of the week", but I couldn't figure out WHICH one. The vocals had a nicotine hum and the guitars took that American-infused British rock route. The keyboardist not only added an Atari arcade feel but a charismatic hipster-dancer swagger.

But by the third song, I finally realized who they *really* sounded like. THE STEREOPHONICS!!!! Holy cow! They sound just like the Stereophonics.

I thought they sounded like the Goo Goo Dolls meets the Rentals. It's really that keyboard tone that's bringing out their inner-Rental. And they're so serious about their music. They spent their "stage banter" time silently tuning their guitars.

A wee bit of internet research revealed that Careen started when Andrew Grow {singer/guitarist/founder} returned from touring the world with Athens, Georgia band Vigilantes of Love.

Ready to front his own project, he founded the band in mid-2002 with longtime bandmate/guitarist Patrick Tetreault. They practiced, realized they had a good thing going on, and recruited other family members and old friends {Andrew's brother Matthew Kronbach on bass; Graeme Enkelis on keyboards; and Andy Uppendahl on drums}. Together, the Careen guys create songs that are part full-on pop, part of grassroots rock and roll. They chock it full of great hooks and quirky keyboard tickles.

The initial songs in the set sounded like well-crafted pop songs with vocals from the days of old. If it were the early-80's, they would be opening up for the Mekons…

… but then they seemed to get more and more Americana on our asses as the set wore on. It sounded more like they would have spent the mid-90's opening for the Bodeans. Or maybe it's just because our friend Sunny pointed out that frontman Grow kinda looks and sounds like John Mellencamp. A lil' pink houses for you 'n me?

My college roommate and club-going enthusiast Kristina Scott always used to say, "Anywhere you go in life, you end up at a Denny's." Because, well, it was true at the time, as Dennys was the only place in Orlando to go in the wee hours after clubbing.

For Three Imaginary Girls, it seems anywhere we go in life, we end up with the Jeunes. And it's not just igLiz, igChar and me — our other imaginary writers keep sending more, and more, and more Jeunes reviews. Jeunes, Jeunes, everwhere!

The Jeunes have been the perfect complement to any indie-rock bill. The band is just the ingredient needed to push you over the edge to go out for the night, to say, "Black Nite Crash, Infomatik, AND the Jeunes!?? Sure, I'll go!" They've been like the perfectly-browned rice pilaf that forces you to order the salmon special instead of your usual ravioli.

And now there are four — the band has added a fourth Jeune to fill in the guitar spaces — and with him, they just might go from being an extra incentive on the bill to being the sole reason for people to get their asses off the sofas and into the clubs.

This is a band where every member contributes an equal amount. Each member is a fundamental piece of the mathematical equation that fits together to become the Jeunes.

Their songs are like comfy wool sweaters — the odd green one that goes with everything and the cool funky buttons. That is the Jeunes.

Jeunes' songs have a sullen intensity that is punctuated by a relentless rhythm section. Their secret subtly lies in the detail oriented guitar and vocal flickers.

The frail background female vocals of bassist Jaime Clapper bring a constrasting innocence to Frontman James Hall's deep-dark Dylanesque lead vocals. And of course, drummer Curtis Hall beats with such reckless frenzy that, were it possible to power a kit on pure adrenaline, his would fly to the moon and back during the set. With the addition of new guitarist David Bos, their sound has become fuller and more anthemic, with waves of jangle and intricate plucking.

In the interest of full disclosure, I must reveal that I am in love with the new guitarist. Expect monumental things.