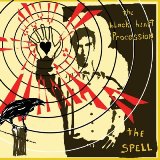 Call me crazy, but maybe right at the beginning of the summer isn't the best time to release an album full of dirges. It's like trying to release a Merchant-Ivory drama on July 4: sure, there are the diehards that will appreciate it, not having to brave the winter weather to see their Oscar-worthy drama, but they'll also likely to get their asses kicked by the rest of the nation clamoring to see XXX III. Unfortunately, Black Heart Procession chose just this time of year to release their latest (The Spell), and as those of you familiar with the band know, sunshine and buttercups they ain't.

The Spell is a bleak album, just like the rest of Black Heart Procession's oeuvre, but it could be argued that it's a more straight-forward rock album compared to their previous outing Amore del Tropico. Nothing really as the otherworldly appeal of "Tropics of Love," but it's still dark, somber, and hard as hell to get into when it's sunny and 90 outside. I've tried. I've closed the windows and huddled in the darkness and what I'm left wondering is how on God's green Earth they could produce an album like this in, of all places, San Diego. It's as if Leonard Cohen has recorded all his hits while lounging on South Beach with Jay-Z and Shaq. That being said, The Spell, when the mood (and season) is right, is the most well-developed collection of songs that Black Heart Procession has put together thus far. Taking equal park Nick Cave & the Bad Seeds, the aforementioned Cohen, Tom Waits, and Modest Mouse, they've constructed a desolate landscape of music that throws a chill breeze over a warm day.

The album opens with a piano line that is eerily reminiscent to Depeche Mode's "Pimpf" and "Tangled" slowly arrives around that melody, striking us with minor chords and wailed/moaned vocals (Pall Jenkins). This sets the mode for the rest of the disc, where the guitar becomes like a pack of wolves chasing down the vocals, with the sinister rolling drums and bass following close behind. This effect is best heard in the title track, a song that could be a musical manifestation of running across a foggy moor at night from a beast of unknown origin. This is really the strongpoint of Black Heart Procession: the creation of a mood, something Nick Cave mastered years ago on songs like "Red Right Hand," where the lyrical content is almost not even needed to evoke such a bleak atmosphere; but when it's added, we're in Tim Burton territory. The violins (Matt Resovich) dance through songs like "The Letter" with such a trembling beauty you're worried that the band might break into tears. Even when it sounds like they might be breaking into a full-blown barn-burner like "The Replacement," they pull the throttle back promptly to reveal the dead body under the leaves. Sometimes the songs are so slow that they never seem to get off the ground ("Return to Burn," "Waiter #5").

There are some moments that aren't as bleak, such as "Not Just Words" that has almost an R.E.M. circa Monster vibe to it, while "GPS" has an almost-lively guitar line that runs across the song. "Places" takes a page from the sound of Nick Cave's The Boatman's Call, with equal helpings of gloom and tenderness, and it ends up being one of the most effective songs on The Spell, taking Black Heart Procession out of the high school notebook-style cartoonish dreariness. The album closes on a Palace note with "To Bring You Back," which has an obvious touch of Americana lost within its midst, bringing an added dimension to the band that is refreshing as it is depressing.

Maybe if this was the bleak of midwinter, The Spell might have come across better to me, but in any case, it's still an strong compilation of songs from Black Heart Procession. So, if you're feeling like it's just too darn hot outside and you want to remember the cold and rain (remember, winter is the best nine months of the year in Seattle), pop in the The Spell. You'll be feeling like Winona Ryder from Beetlejuice in moments.