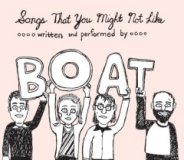 My attraction to BOAT stems from a love of eccentric, "sloppy pop." It is this sloppiness, the result of a DIY methodology, that makes them so endearing. Indeed, a record sounding as though it came from the living room of a neighbor, or the basement of your own house, sounds somehow less removed from the average listener. Remember the intimacy everyone loved when the first Iron and Wine record came out? Jessica Simpson albums seem to just materialize from the artificial wind of Los Angeles recording studios and sound laboratories.

BOAT's first album was bred from a basement. Life is a Shipwreck sounded more authentic and articulate than any major-label signed / arena-rocking / Abercrombie-sponsored pop act. It smelled of Neutral Milk Hotel's much-lauded Aeroplane record…but with a major nod in theme to Coleridge's Rhyme of the Ancient Mariner. People who read, people who play music in basements, these are people I can relate to. A basement band without a record label; a reverb-loving rock band with a lot of scrapbooking supplies. Their releases still smelled of Elmer's glue while at the merch table. Each cd cover painstakingly made from construction paper and photo-copier brainstorms. That was the appeal of BOAT circa Life is a Shipwreck.

The band has since signed with Portland-based Magic Marker Records but they are still of the DIY aesthetic. Although the handmade packaging has had to be given up in the name of "distribution," BOAT hasn't abandoned the basement sound (or the basement as recording studio). They have gotten better at it, though. Songs… improves on the old recordings so much, in fact, that the band decided to revisit some of the best from Life is a Shipwreck.

"We feel like it would be weird for new fans to hear only new songs," D. Crane writes. "All of our old favorites [would only be available] on out of print homemade CDs."

Old fans will be pleased to hear the new versions of old favorites: "Lanterns and Laughing Ladies" and "Return of the Rainbow Shoelace" especially, which emerge from the deep reverb they inhabited on Life is a Shipwreck and find themselves amid a new brightness and glow. D. Crane explains the new brightness:

"Being on [Magic Marker] we were very excited to release the songs how they sound live. I think the record documents our sound live. We have a new drummer…J. Goodman….We also used 4 mics this time instead of just one for the drums. I think we are learning."

Which leads me to the obvious reverb questions:

"I wish the record had a little more reverb in places but I think that overall the recording quality adds to the songs. I do get nostalgic for turning on the heaviest amount of reverb, but I think we wanted it to sound clearer."

Nostalgia or no, the result of BOAT's new approach to recording-trying to recreate their live sound, that is-delights and pleases in the way only a live band can. Over the course of 17 tracks, D. Crane (vox/guitar), M. McKenzie (bass/guitar/vox), and J. Goodman (drums) create a veritable rock show in your headphones or speakers. It's loud and over-bearing, but rather it exists slightly removed, as though you're standing in the back of the Crocodile, enjoying a beer, and seeing a band for the very first time.

You're blown away by tracks like "Holding All the Globes in my Hand," which sound so much different then on that handmade CD. You bob your head infectiously. You sway. The songs that you might not have liked, as it turns out, are songs that you liked very much, and plan on liking for a long, long time. The title of the record is less a caveat than it is a sarcastic challenge. The sing-along choruses and chugging beats beg to be enjoyed. And before long, your life will revolve around "Beast for Hire."

Yes, DIY fellow enthusiast, despite its lack of the handmade jewel case, the record will be easily remembered at the end of the year as one of the year's best. Perhaps in keeping with their DIY attitude and their basement band work ethic, BOAT salutes your freedom to choose not to like them; they're just doing their thing: