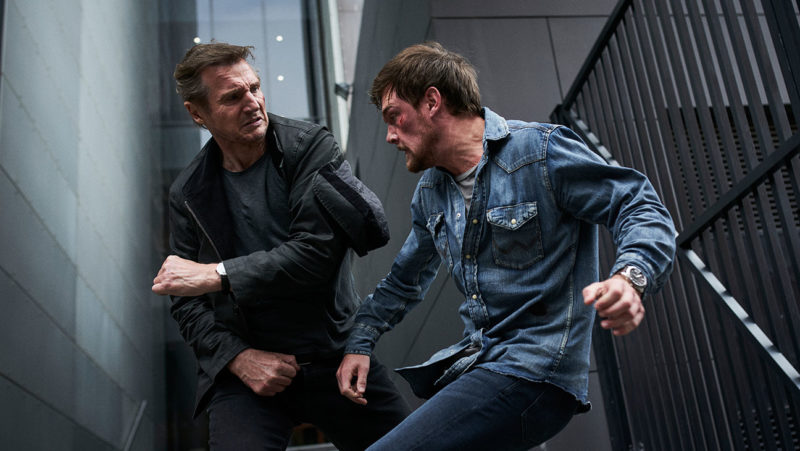 “If I find out you had anything to do with my daughter and granddaughter disappearing, you’re gonna need more men.”

A familiar line uttered by Liam Neeson in his latest action flick, BLACKLIGHT, but unfortunately, the film doesn’t quite live up to its TAKEN aspirations.

We open on activist Sophia Flores, who’s leading a rally around an initiative called Game Over (yes, yes, I KNOW), which is apparently lobbying for both equal pay and free healthcare for everyone. After the rally she heads home in an Uber and is killed by another car as she exits it. Both drivers make eye contact and nod with fierce intensity. GAME OVER INDEED

Cut to Travis Block (Neeson), driving a shiny new Dodge Challenger Hellcat – honestly the most exciting thing in this film – to a backwoods trailer park with an angry mob of stereotypes wielding firearms at the local police, demanding to confront a woman inside. Block is a covert FBI agent whose job is to rescue other agents from bad situations. A couple of exploded propane tanks later, he speeds the woman agent away to safety while she crouches on the floor of the car and shakes her head in an “Oh, YOU!” fashion.

Intro: Family! Block attends his granddaughter Natalie’s fifth birthday party at the budget Chuck E. Cheese and has a conversation with his daughter Amanda (Claire van der Boom) about being a shitty father but wanting to be a better grandfather. Amanda’s exasperation with her “odd” dad is expressed in shrugs and tight smiles – even when Natalie opens her gift from him and it’s a legit Taser.

Poor Grandpa Neeson just wants to retire to spend more time with his fam, but his best friend and head of operations Gabriel Robinson (Aidan Quinn) won’t let him. Especially now, when he’s needed to control a young agent who’s gone rogue and intends to spill all the department’s secrets to the press. The press in this case is a journalist named Mira Jones (Emmy Raver-Lampman), and I wish I could tell you that the rest of the movie involves her and Block on the run from the bad guys … but sadly, no. That’s not how this story plays out.

OBVIOUSLY there’s a twist to this whole thing, and heyyyyyy don’t forget that Block also has OCD (which Director Mark Williams shows by having Block hear either his voice or someone else’s voice repeat things over and over and tells us how many times he has to count exits, etc.). And sure, his family is threatened …. I think? Maybe? It’s never clear how much of that threat is in Block’s mind, which I’m sure is part of the point but augh.

In addition to the action being pretty lackluster, there’s a lot of heavy-handed commentary on the state of our country, with Robison delivering a big speech near that end that contains gems like, “Nowadays this country is ruled by gotcha moments on Twitter!” And honestly, there’s no real stakes to fret over so there’s nothing about the plot that kept me invested.

BLACKLIGHT is really just filler, and there are much better Neeson action films to consume.