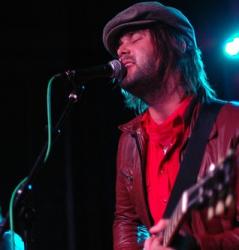 The Blakes have taken the Seattle music scene by storm in a very short amount of time, and they've earned it, releasing two EPs and a self-titled full-length record {review} in less than a year.

They've played SXSW, Sasquatch, Seafair, and Bumbershoot this year alone, and are just about to launch into a huge nationwide tour. Really, I'm exhausted just thinking about all that.

Last night was their release party, both at VERA and later at the Crocodile Cafe (these guys don't take a break!), celebrating their new EP release on local label Light in the Attic Records, Streets {review}. Although their set was pretty short — probably because they had to skip across town to sound check at the Croc — their energy was astounding, even after a night of drunken partying (or so I read in the Seattle Times that morning). I've heard about the Blakes quite a bit, but I'd never actually listened to them before…

The Blakes. Photo by Eduardo Brambila.

…Hearing them for the first time live, I was struck with the impression that this must be what it would feel like to see the Rolling Stones before their rise to fame; leather, tight pants, and all. Their guitar riffs had a definite bluesy feel, their hooks were solid and catchy, and their songs were driven by the loud yet balanced sounds of bass, drums, and guitar — everything I'd expect from experienced classic rockers. The emergence of a subtle keyboard riff in the fourth song really completed the sound, and made me giddy (I love well-placed keys).

The Blakes. Photo by Chona Kasinger.

The last song came much too soon, but when it did the band got even livelier. Halfway through, a large man leapt on stage and started dancing and singing along. How rude, I thought. It took me a minute to realize this was a guy from the Saturday Knights, who were playing after the Blakes that night. Bassist Snow Keim handed the stage-crasher a tambourine, and everyone cheered. Soon after, as the song was reaching its climax, another member of the Saturday Knights hopped across stage banging loudly on a cowbell. It was a fantastic close, as guitarist Garnet Keim was absolutely shredding and sharing a mic with his brother, the Saturday Knights were jumping around (and they knew all the words!), and the crazy fangirls I've come to associate with great indie-rock bands were melting with pleasure.

It was a fantastic show, not only because of the Blakes' high-energy performance, but because of their opening act Dept. of Energy. I'd heard great things about this band, and they did not disappoint. Like I've said, I love any band with great keys, and these guys definitely had that. They looked like those kind of geeky kids at school who secretly lead amazingly cool lives. Their synth was incredibly catchy, almost jazzy, and lead singer Robb Benson had a voice that could have competed in American Idol. I'm very excited to see more of them; I'll be keeping my eye out.

As for the Blakes, they're about to take the country by storm, and all we'll be left with is that classic line, "I liked them before they were cool." 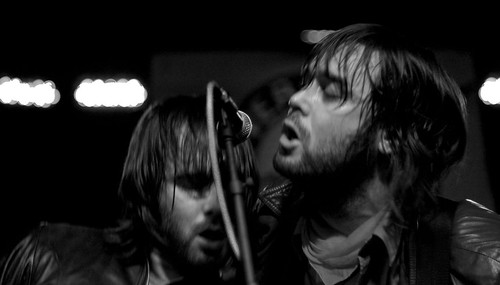 The Blakes. Photo by Eduardo Brambila.