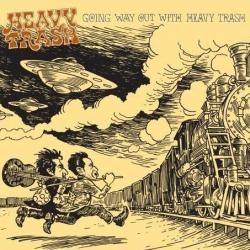 Going Way Out With Heavy Trash

Jon Spencer's musical career has been a model of consistency for the past 20 years, with the key element tying his disparate bands and projects together being a distinct rawness and simplicity. All of the music Spencer has produced, from the Stones-obsessed trash blues band Pussy Galore through to his eponymous trio, the Jon Spencer Blues Explosion, has had its seams and roots showing, blissfully free of pretension and filled with an undeniable sexiness.

In that sense, Spencer's new rockabilly outfit, Heavy Trash, is the most polished sounding work that he has done to date, as if he had peeled away the last few layers of his musical aesthetic to find a shiny Shure 51 microphone at its core. There is still the playful, self-referential vein running through the album, but it has been shot up with a healthy dose of reverb and the clatter of a standup bass.

The most fascinating aspect of Going Out, and its self-titled predecessor, is how non-nostalgic it feels. Unlike other groups that mine this sound, Heavy Trash's songs don't give the impression that they wish they could have lived during the early days of rock music. Instead, it sounds like he and bandmate Matt Verta-Ray are playing the music for their own ends, almost as if done for a lark, resulting in a sound blissfully free of both pretension and stilted facsimiles of better-known songs.

Heavy Trash almost achieve perfection on this album, from the shimmying rave ups “I Want Oblivion” and “They Were Kings” to the sultry swagger of tracks like “Way Out” and “Crying Tramp”, but Spencer and co. miss the mark with the long (at least by this album’s standards) shuffling mess that closes the album, “You Can’t Win.” That final track is overproduced malarkey, with Spencer’s spoken word ramblings about the early rockers who were “drunk on pomade… cherry wine, and Pepsi-Cola” mixed in with another set of spoken word ramblings being mixed in and played back at various intervals. It is a small misstep, but one that mars what could have been a spotless record.