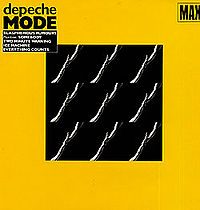 I read somewhere that Martin Gore picked up a paper one day, highlighted three stories, then wrote a pop song about them. The resulting track, from 1984's Some Great Reward, was banned from US radio stations because, I'd guess, it made disparaging comments about God. Wikipedia tells me it was allegedly the same girl in all three stories. It also tells me that Martin Gore recorded "Somebody" in the nude. So there's that.

That Depeche Mode is so edgy.

Of course, there is a bit of foreboding to the track, all haunting synths and serious vibes. My impression of Dave Gahan and the boys was never that they were cynical. Ever see Dave try to start the hand waving at a Depeche Mode concert? They're so happy to be up there, living the rock star dream, that they don't have time to be pissy about anything. So that makes "Rumors" an artistic stretch.

And it's still danceable, kind of. Not as much as "People Are People", but that's asking a lot. I can't imagine how much of a buzz kill it would have been to hear this come on at your standard 1984 goth club, but no one can really dance at a goth club anyway, right? And the beat, while hidden in the back of the mix, is massive and strong. That pseudo-industrial bass thump going into the verse is the stuff my young, synthy-goth addled mind loved. If my parents would have let me put all black on and dance around my room, I would have. I probably did.

The best thing about this track coming up in a random iPod playlist, however, is the reminder that the 80s greatest synthpop band wasn't completely cheesy. What made later albums like Music For The Masses and Violator so solid wasn't just a perfect combination of timing and 808s, but a natural talent for songwriting and the ability to turn an unwieldy chorus into a catchy hook. We could use a little more of that today.