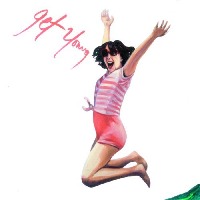 Boston-via-Vermont dance punk trio, Pretty & Nice, serve up delectable rock riffs on their Hardly Art debut. Recorded in a basement studio, Get Young is a quirky blend of electro synths and post-punk guitar progressions, garnering such comparisons to XTC, Elvis Costello and the Talking Heads. It’s music with a strong personality, fractured and disjointed at times, and weird in a really fun way. The image of cute hipster girls jumping for joy in the springtime sprinkled about their adorable album cover is a perfect representation of their sound. It’s artsy, it’s bubbly, it’s a thigh slapping good time.

All of the songs on Get Young are pretty short, and each track is rapidly shifting gears. It’s like music for ADD kids. But Pretty & Nice has a strong sense of rhythm and despite the constant changes, keeps thing really tight and cohesive. The majority of the songs have fantastically charming hooks, and singer Holden Lewis serenades with unexpected melodies in his signature sugary falsetto, although the funny little British accent is less present than on the band’s first album, Pink & Blue.

The effervescent “Tora, Tora, Tora” is definitely pop, but if this is pop music, it’s more like cubist pop, Pretty & Nice infusing the genre with a bit of abstraction. The Beck-ish “Pixies” features a theatrical, bass heavy guitar line and plays with the layering of sound. Containing just a hint of glam, Get Young is music that doesn’t take itself too seriously. Toward the middle, the album loses some of the frolicsome energy contained in the strong hooks, but this passes quickly and the album picks up momentum again on the penultimate track, “Gypsy,” and keeps it at a steady intensity through to the last note, ending abruptly, and leaving the listener wanting more.