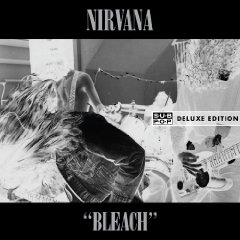 Are you a Bleach fan or into In Utero? This question, not exactly worded like that, has sort of replaced the “Beatles vs. Stones” dumb-ass everyone-has-an-opinion question in every rock-loving bar from Portland to Portland. The truth is, someone out there must have loved Nevermind, because copies of it are everywhere. But attaching yourself to the band’s debut for indie Sub Pop or their second full length for a major label seems to be as good a way of branding yourself as a circular cigarette burn on your hand made you a Germs fan.

If you’re a fan of Bleach it usually means You Were There, or at least imagined yourself so, when Nirvana’s first full length came out twenty years ago. Sub Pop has reissued the Platinum Certified album as a deluxe CD with mostly-photo booklet, or in 180 gram white vinyl (as was the original run), and now of course in download versions. The big news, besides discovering the actual great album for yourself if you never have before, is that all the formats include Live at Pine Street Theatre from a February 1990 show in Portland. The seventh track in that set list is the cover of “Molly’s Lips,” played to a crowd that probably knew who the Vaselines were in the first place.

The main difference between a Bleach fan and an In Utero fan is this, basically: The former is perfectly fine with Chad Channing’s drumming on most of the tracks (the Melvins’ Dale Crover plays on “Paper Cuts,” “Downer,” and one of Nirvana’s best early songs, “Floyd The Barber”), and feel it more punk than rock. In Utero featured a band with a very gifted frontman figuring out a new language for popular music, expressing marginalized feelings and very peculiar observations about the world, the flesh, and the pride of life. And Dave Grohl, who slammed the drums into complete rock and roll submission (trained from his days as a D.C.-era metal-inclined workhorse).

But Bleach is when a misfit just found that voice, and it wasn’t just Cobain’s, it was Channing’s and bassist Krist Novoselic’s too. It had no real vocabulary yet, save for Bowie-into-Badfinger pop culture collages (“About A Girl”), faux butt rock guitar noodling (on the cover of “Love Buzz,” a joke that gets weary fast when listening to it now), and a deep love for John Cale-era sounding Velvet Underground almost wordless transgression (I will never tire of “Floyd The Barber,” an ode to the sadism of conformity still not bested since by any rock group). Bleach is not a perfect album, and so is best appreciated by people who like their music to always be forming. The sequence is the best you can imagine, and yet there are some dull spots just because of the expected amorphousness of its college rock-period creation-time.

Bleach sold 40,000 copies initially, which sounds like nothing compared to their next two albums’ first runs. But then they didn’t seem like they were perfect for lightening the mood between Jesus Lizard and Big Black, or in a long block with Red Kross and early Echo & The Bunnymen, on KCMU in 1988, the year when Nirvana began recording it. I don’t think the fan backwash from Nevermind and In Utero actually swallowed up Bleach, even if it did eventually sell nearly two million copies. Its reputation has always seemed as fearsome and depressing to the casual listener as a casual walk to the Vogue through a not yet gentrified Belltown would have been in the late 80s: All art-damaged punks, once famous junkies, grad school dominatrixes and new crack hookers, welfare-scamming thieves, longshoremen no longer good for shore, and the shadow of the law so far away you can’t even hear the sirens closer to downtown.

Nirvana were ripping off plenty of groups at this time, from the chunka riffs of their beloved metal bands (on the poppier side like KISS, though), to the dark glam of the aforementioned Red Kross and bigger beat others in the Los Angeles scene. However, even a musical nod to Mudhoney on “Negative Creep” seems to translate the underground drive into a whiff of taking over the rock world FM joyfulness that would end up in Queens of the Stone Age and others within a couple short years. Jack Endino’s production seems as spare and powerful as usual, but it’s also easy to imagine he and Crover were filling in some gaps to a young, frenzied three piece’s Chevas dreams and methedrine wishes.

The verdict? I’ve always meant to buy In Utero, because a lot of my favorite writers fall on its side (Gillian Gaar, Everett True, etc.). But I heard it enough in cars and at house parties and in bars and overheard in clubs when it came out that I knew Bleach was going to remain the one Nirvana album I wouldn’t sell back to Wall of Sound for food money when the stamps ran out before the end of the month. With the delicious live set included, it remains the essential one for playing when I get back from the food bank now.

Some things never change, and some things get even better with age (not food bank food). Bleach has grown up better the past twenty years than I have, that’s for sure.