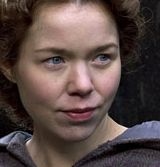 I'm going to recommend an eight-hour British miniseries, based on a mid-1800s Charles Dickens novel, airing on PBS. For those of you still with me, I'll add that it contains elements of trashy soap opera, gripping courtroom intrigue, Sopranos-style crime drama, lefty social commentary, and even an X-Files-esque moment of, um, spontaneous combustion.

It's called Bleak House, and it's required viewing. The sprawling, fast-moving plot and subplots concern a generations-old property dispute hobbling its way through the Chancery legal system, and focus on three orphaned teens who may be heirs to a muddled (cursed?) fortune. One is the heartbreakingly well-intentioned Esther Summerson, played by a ridiculously good actress named Anna Maxwell Martin (pictured here); her tender portrayal of an unfortunate soul struggling with family loyalty and unrequited love will make you cry.

Spreaking of The X-Files, London-raised Gillian Anderson (probably the most recognizable face to American audiences) is fantastic as a bored, wealthy, desperate housewife with some major skeletons in her closet. (And yes, they all come out. In a big, big way.)

In keeping with the serialized publication of the original, this adaptation of Bleak House aired on the BBC as sixteen weekly half-hour segments (each with a doozy of a cliffhanger ending, natch). It's set to air as four two-hour chunks on Masterpiece Theatre, beginning this Sunday night at 9p (check local listings). And, seriously, American TV is lucky to have it.