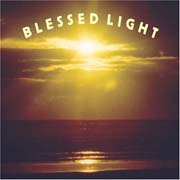 Every so often there comes a band that is so in love with a particular sound that it flows out of them as effortlessly as rocky mountain stream. On Blessed Light's Mill Pond debut Love Lights the Way, classic rock influences such as George Harrison, the Bee Gees, and Eric Clapton seamlessly interfuse with honest passion and incredible songwriting to create a wonderful listening experience.

Quite often their songs end in crescendoing key changes that catch the listener unaware (such as the Bee Gee's inspired track "Something More") and leave one presently surprised by the effect. Frontman Toby Gordon's voice has a quality and expression so much like John Lennon it's uncanny, especially on "My Beloved" (one of the records shining tracks). But Blessed Light's take on their classic rock influences is not just a rehash of old hat memories. The songs have a life to them that at moments sound like Spiritualized and Beachwood Sparks, like a more modern take on blues-infected, cosmic Americana.

The album also features songs deeply rooted in spiritual overtones that stem from Toby's love of early Christian rock, but the religious overtones merely reflect on his love of life and the beautiful elements of experience — they don't seek to preach. The only negative moment on the release occurs when the guitar line gets to close to Clapton's "Tears from Heaven" for comfort on track six, when I found myself rushing for the Next button. All the other songs are true gems.

What makes this record work isn't just the sheer talent of the players involved (the whole band is incredibly tight), but it's the quality of their understanding in structuring these songs. The production quality from Phil Ek lends itself positively to this record as well — he really nailed the band's sound.

Blessed Light's Love the Lights Way is an album for people searching to be lost in a love song that calls back to a time when songwriting actually meant something and people still believed that love was all you need. It will help to remind you that things aren't that bad, if you only take the time to notice the good things around you.