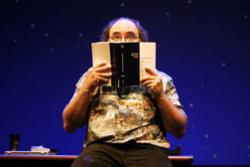 The Intiman's press notes for its current production claim that writer/performer Josh Kornbluth is best known for the 1992 comic monologue Red Diaper Baby, his story of growing up with Communist parents who vehemently refused to support The Man. I was only familiar with his 2001 flick Haiku Tunnel, a droll little indie (and, previously, stage production) about Kornbluth's experiences working as an office assistant to a powerful San Fran tax attorney. (Have you seen it? Good one for the ol' Netflix queue.)

Love & Taxes, like the other live productions, is also a solo autobio, this time about Josh's trouble with his own taxes — and an encounter with a "holistic" tax attorney/counselor — which eventually ballooned into a massive debt to Uncle Sam. It's a well-conceived and -executed piece by a highly gifted performer, and its current world-premiere staging makes for a funny and engaging evening of theatre.

There's quirk aplenty. It comes early on with Josh explaining his theory that oboe performers are doomed to have (literally) large heads, and continues in his amazing portrayals of the story's minor characters: Josh's dad (imbued with comedic commie craziness), a blunt IRS commissioner, and Josh's first groupie (who'll later become his girlfriend) are particularly strong. Kornbluth the storyteller has a knack for the small but compelling details which bring immediacy and humor to the proceedings: one seemingly minor first-act character pops up again unexpectedly near the conclusion, and it's as though he never left.

There's a love story of sorts (aforementioned loopy groupie), but ultimately Love & Taxes is about fathers and sons — Josh's severely blasé anti-establishment pop succeeded in handing down a near-infuriating level of cluelessness — and the play's final sobering moments speak volumes about letting go.