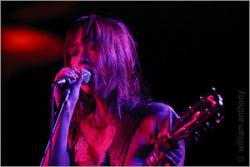 Thursday was a big day for shows. It felt like everyone was in Belltown; scarce parking, busy crosswalks, and sidewalks teeming with people happily en route to see great music. While several of the other Imaginaries opted for an evening with Stephin Merritt at the Moore, I ventured out to the other big show of the evening: Blonde Redhead at the Showbox.

I arrived an hour after doors opened, marveling at the line (or, rather, the linear crowd) still waiting to get in. Just inside, IQU had commenced their set, winning more than a few new fans with their distinctive and infinitely danceable electronic rock. This local twosome's ability to multitask on stage is truly impressive. KO, who my friend once described as the Inspector Gadget of musicians, plays guitar, theremin, keyboards, turntables, and a laptop — often all at once and always superbly. Michiko displays equal virtuosity as vocalist/keyboardist. Michiko's feather-and-tinsel headdress fluttered about as she fiddled with keyboards and sang her effects-heavy vocals that got the crowd dancing early. If you haven't heard their new LP Sun Q yet, my only question is — what are you waiting for?

Next up — Portland darlings the Helio Sequence. Yet another twosome, the Helio Sequence fashions a huge sound from their sparing duet. Heavenly guitars and glittering cymbals soon filled the room as vocalist/guitarist Brandon Summers sang in an almost whisper.

They spent the first half of their set playing tracks not featured on their current release Love and Distance, which charmed me straightaway with a less poppy, slightly darker style of swirly psychedelia. Not to worry Love and Distance lovers — by the fourth track, Summers busted out his harmonica and rallied the crowd with jangle-bright songs like "Harmonica Song" and "Everyone Knows Everyone." By the end of their set, the Helio Sequence had thoroughly prepared the crowd to dance the night away.

At long last Blonde Redhead took the stage, much to the delight of the now-packed Showbox. With elastic drums and spooky guitars, Blonde Redhead shifted the atmosphere from buoyant to nearly paranormal, all while keeping the crowd moving to the beat.

Early on they played a number of tracks from Misery Is A Butterfly, their newest album, which often tends toward the dark and downtempo. Slow and steady seemed the rule at first, with Kazu Makino's breathy vocals adding a delicate eeriness throughout. About midway through their set, Blonde Redhead amplified the pace with an instrumental rendition of "Futurism vs. Passeism, Pt. 2," at which my friend Melodie declared, "Don't you just love driving to this?"

"Elephant Woman," a song written about Kazu Makino's tragic horse riding accident that left her unable to sing for many months, highlighted everything that I love about Blonde Redhead — sinister and ethereal while still substantial, it seduces quickly and elicits the feeling of a 1970s French suspense drama. The encore featured tracks new and old, including the urgent but bouncy "Equus." Makino swayed this way and that as she sang, calling to mind the tragic specter of the girl on the videotape in Ringu.

At the show's end, our appetites well-sated, we tumbled out onto the chilled streets, our ears still ringing with Blonde Redhead's haunting confections.