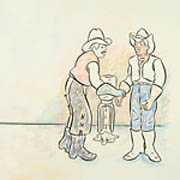 Three years ago I was at the high school graduation of a friend. Milling about after the alphabetical procession of circumstantial pomp, waiting for my friend to find me, I ran into a guy I knew from my own days at the high school who used to play in a band. He and I were the organizers of the "Radiohead Kid A Listening Party" in the school cafeteria one year, and had always had good conversations about music.

I had been looking for some good solid rock and roll that didn't bore me. Something akin to the Radiohead golden idol of "The Bends." But there hadn't been anything, and there's only so many times you can listen to one record before you get tired and need something that surprises you. I had reached the point where I knew the inflexion of every single syllable of "Fake Plastic Trees," every bent note in Johnny Greenwood's solo on "Just."

Henry, or whatever the guy's real name is, suggested I listen to the first Fountains of Wayne record. (Two records before the band met Stacy's mother at the pool party.) It wasn't exactly what I was looking for, but it was okay.

For the past three years, since Henry's suggestion, I've still been looking for that rock record. Lucky enough, I stumbled across three amazing rock records that blew me away in just the past few months. The first was the debut by the Blood Brothers, "Burn Piano Island, Burn." Then there was the Scot-rock greatness in Franz Ferdinand's record, and now the new record by Saddle Creek Records' Beep Beep.

Beep Beep of course have their incestual allusions to other Saddle Creekers, (Joel Peterson of the Faint and Broken Spindles plays bass), but this release is defiantly a departure from the psychoanalytical niche held by most of the other bands on the label.

Beep Beep is the perfect blend of kitty-cutting Blood Brothers vocals and Franz Ferdinand guitar violence. Lyrically, there's a certain articulation missing, but musically it's fantastic. 2004 rock and roll at its finest. Remember the Rapture? This is better.

Business Casual, Beep Beep's chosen record title, offers ten songs that cover myriad topics that can all be grouped under one large heading of "angst." Album opener "I am the Secretary" enters your skull and stones your head just enough to get you used to what is going to happen on the rest of the album. If you've ever had a pissed-offness to those management materials that govern you at work, or the puppet master puppet heads that tell you to get them coffee, then this song will be your national anthem.

For some reason, singer Eric Bemberger is characterized on the SCR website as being one who enjoys, "the original utilitarian motivation behind post-war modern design of architecture and furniture." The reason becomes clear once the album begins. At least sort of clear. Realization occurs: These musicians are not your everyday scenesters.

Business Casual isn't as much of a departure from music in general as it is from Saddle Creek. But if I had asked Henry three years ago for a solid rock record that wouldn't bore me, and he had handed me Business Casual, I would have been blown away and euphoric. If we did ratings like they do for Olympic synchronized swimming, Beep Beep would get a Bronze level score for artistic interpretation, and a solid Gold level score for execution.

Beep Beep was out on the road supporting the Faint and TV on the Radio. I got to the 9:30 Club in D.C. just in time to see them take the stage, and, as I suspected, they rocked out furiously. People unfamiliar with Business Casual seemed to be taken aback by the harsh grittiness of the guitars and vocals, but by the end of the short opening set the D.C. crowd seemed to be pretty into it. I talked to one guy by the bar who said it reminded him of a Blood Brothers show he had gone to in Richmond awhile before. I agreed with him.

But while the album may be a mood piece, live is a different story. I was in a good mood when I got to the show — who wouldn't be with that lineup of bands? — and as Beep Beep exited the stage I was in an even better mood. It's always great to see a band take "rocking out" to a whole different level. But I'll be damned if they didn't leave me exhausted. Thank goodness TV on the Radio was in between them and the Faint. I don't think I would have been able to handle it.