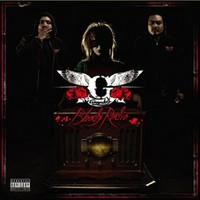 Gloom is in the air when it rains in Seattle, and it rains a lot. Grayskul is the Hip-Hop personification of that overcast atmosphere, all dark tones and gothic lyrics. As Hip-Hop duos go, Grayskul is one of the finest and in good company being part of the Pacific Northwest’s Hip-Hop community and an offshoot of the Oldominion collective.

Comprised of Onry Ozzborn and JFK, the two spit vernacular bleakness over gloomy beats, most of which are provided by various members of the Oldominion crew. This latest album, Bloody Radio, is nearing two years old at this point but is a strong document of this dynamic duo’s unique spin on Hip-Hop. You could call it Doom-Hop or Goth-Hop if you want to get really silly, but those are blanket terms that don’t accurately describe the eclectic mix of styles found here.

Onry Ozzborn is gifted with a deep, powerful voice that carries his points across very clearly. JFK on the other hand, has a bizarre voice, very nasal pitched and a bit harder to understand. These are the primary voices on the album and they both are well complemented by the down tempo beats. The album has a very shadowy atmosphere, like wandering a city’s alleyways at night and that affords it an unusual presence in the Hip-Hop world. Every track on the album has kind of a minimalist bent to it, unlike some other Hip-Hop production which is all flash and glam, this is very subdued, not so much that it fades out of sight, but small enough not to obscure any of the voices.

Underground Hip-Hop being the collaborative environment that it can be, Bloody Radio is rife with guests, all of whom manage to lend their talents without overshadowing the stars of the album, those being Ozzborn and JFK. The list is pretty impressive actually. Cage shows up to say something nasty (as usual) on the short but sweet “How to Load a Tech” and Pigeon John ghosts his way through puppet show of “Dance the Frantic”.

But the most impressive collaborative tracks come in the form of 1) the zombie apocalypse of “The Office” which has its chorus provided by the incomparable Aesop Rock and its final verse by Slug of Atmosphere, and 2) The haunting “Missing” which features not only some of Ozzborn and JFK’s finest verses, but also Andrea Zollo of Pretty Girls Make Graves singing chilling words about the loss of the soul.

The best track is number four, the title track “Bloody Radio.” Ozzborn and JFK take time to wax out their opinions of modern radio and how it’s a cesspool of bad beats and repetitive lyrics. The track’s fast pace is different for the album, and provides one of their few shout-along choruses “What makes the world go round? THE RADIO! What makes you scream out loud? THE RADIO!” It’s the best track on an album with no real weak takes. Onry Ozzborn is quickly rising higher and higher in the musical world, being one half of Grayskul and the mastermind behind The Gigantics. What he’ll do next is anyone’s guess, but it’ll be good, I can promise you that much.