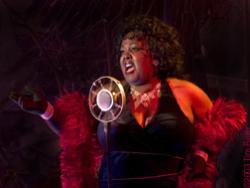 It Ain’t Nothin’ But the Blues

If you have the patience to endure its hit-and-miss first act, the Rep’s sure-to-be-popular season-closer It Ain’t Nothin’ But the Blues (which has already been extended beyond its original 5/1 close date) will reward you.

This Tony®-nominated musical revue purports to be a crash-course in the history of the authentically American art form known as the Blues, but don’t go expecting to actually learn anything. Do expect a rousing, soul-stirring good time, with some incredible vocal performances and a decent sampling of the musical form.

The song-studded show features traditional African chants, Southern gospel, Delta and Chicago Blues, and even some hillbilly and honky-tonk music. Two large screens on the stage flash archival images from the appropriate time and place, and oh how I was wishing for a bit more info — timeframe, decade, anything — to help put it all into context.

But, again, education this ain’t. There’s a wealth of vocal talent on display, though. Most notable:

Dozens of tunes, many of them amazing, especially after this gifted musical gang moves from the church house to the juke joint.