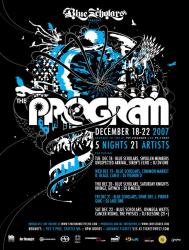 By any measurement, The Program – the five night showcase of local hip hop acts curated (and each night headlined) by Seattle’s own Blue Scholars – was an unqualified triumph. By the time it is over, each night will have sold out, with at least dozens of people clamoring to get in.

It was a risqué venture, to be sure. Never, to my knowledge, has a project been undertaken of such ambition with local hip hop. Could the Blue Scholars handle playing five consecutive nights? Was Neumo’s the proper venue (right in the heart of Capitol Hill and mostly plays host to rock shows)? Is there enough talent in the Northwest to fill out all five nights? Yes, yes, oh hell yeah. Isn’t that why those of us who like hip hop like it in the first place? The music often projects an aura of confidence and invincibility that we can follow. As those (non-local) smartasses from Handsome Boy Modeling School once put it (truthfully), “rock ‘n roll could never, ever hip hop like this.”

“You didn’t come to a show” exclaimed the Blue Scholar’s Geologic early into his group’s set, “you came to a motherfucking party.” It was as much of a celebration of the establishment of local hip hop as a showcase for it. The acts, though, were perfectly in tune with the posted schedule. You could set your watch to it (if your cell phone didn’t do that automatically) – every act began when the schedule said it would.

I was there for the fourth installment of The Program, which had an exclusively Seattle-based bill (throughout The Program, acts up and down the I-5 corridor were featured, from Portland to Vancouver). Up first was GMK (which stands for “Golden Mic King”). He was a young MC (I searched all over the internets trying to confirm his age to no avail. I’d guess somewhere around 19 or 20) but on stage and on record he sounds much older, with a delivery that was equally frantic or smooth – whichever the beats called for. He also has a mix tape available for free download on onlygp.com. Later he joined the second MC on the bill, J. Pinder, for several songs on his 30 minute set.

Throughout the night, the audience’s reaction to an act was driven by the beats. When they were upbeat and unpredictable, the packed crowd responded accordingly. It reminded me of one of the last sold-out shows at Neumo’s I was at, French electronic duo Justice. Justice, like the DJs on stage at the program, brought the audience along for the ride, almost controlling the crowd like puppets. They knew which beats the crowd would respond to and knew which moment to put them on. Similarly, each act at The Program Thursday night had a few moments where the crowd went wild and all you could see were hands up in the air. Even at one point DJ Jake One, who was spinning records between songs, got the crowd to sing along to NWA’s “Fuck tha Police.” Or at least sing along to the chorus.

Up until the Blue Scholars took the stage, the highlight of the evening for me was Dyme Def, A local trio whose LP, Space Music, I’ve only just recently become addicted to. Their set was only 30 minutes (I thought the schedule said 45) but it was tight and energetic. I don’t think any of the three rappers ever had their own verse; they seemed to all finish each other’s sentences as a group – which requires perfect timing to pull off – which they, of course, had. They won the crowd over early when their DJ, hot producer Bean One, sampled the Beastie Boys’ “Paul Revere” and got the loudest applause thus far into the evening. It was at that point obvious that the crowd was 95% Caucasian. They closed their set with “The Game Needs Me,” the best Northwest rap song I’ve heard all year. The chorus is catchy as hell (“Can’t leave rap alone, the game needs me”); the verses are smart and skillful, boastful but not too arrogant; and the beat is energetic and has a few unpredictable breaks. One rapper in Dyme Def said it was in regular rotation on KUBE (the Seattle mainstream hip hop radio station, for those outside of King County). That is no insignificant feat. I’ve also heard it on KEXP several times as well.

I suspect that Dyme Def’s set was cut short to give more time to set up for the Blue Scholars. That’s understandable, considering this night they were playing with a full band, Big World Breaks (who were also part of their set on the first night), for most of their set. If my count is correct, there were nine other people joining Geologic and Sabzi onstage, including a horn section. They went all out for this performance, even throwing a bone to the white guy college crowd by rhyming over the music to “Float On.” Yes, that “Float On.”

It was positively sublime to hear the sold-the-fuck-out crowd, not one you would assume to be politically active, sing along to the chorus of “Back Home” (“Bring ‘em back home, for my brothers and sisters who have been gone too long, I don’t want to have to keep singing this song.”). It was a moment I wish George Bush would have seen. Not that he’d care, but still.

The live band (especially the brass instruments) helped draw out the sound and made songs like “The Ave” sound even funkier than they do on record. Another local rapper, Gabriel Teodros, showed up for a cameo on “North by Northwest” and dropped a verse. By the time it was over, performing most of their well-known songs (I think closing the evening with “Joe Metro”), they were on stage for almost 90 minutes before they left the stage, only to be dragged back for an encore.

The whole affair was a thing of love. Each act gave a shout out to everyone else on the bill that night. Lots of the acts in The Program use the same producers (like Vitamin D, Jake One, and Bean One) and the crowd was packed with people who went crazy for the people performing. Everyone. Not just the headliners. That’s something I don’t see too often (or even at all) at the countless rock shows I go to. Then again, as Geologic put it, this wasn’t a show. It was a motherfucking party.