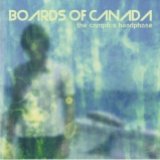 Electronic music seems to be at a turning point these days. Long gone are the heady days of the mid-1990's where it was the "next big thing". Of course, that status lasted all of, oh, 20 seconds before it was co-opted by the powers that be and the flagbearer became Fatboy Slim and it was all downhill from there (I still get chills, in a bad sense, from "The Rockafeller Skank"). There were few survivors from those days of yore, with the Prodigy becoming a caricature of themselves, Chemical Brothers lost in their own loops and Aphex Twin hunkering down in his live-in tank (and again, lets not mention a certain Mr. Slim). Like the highschool quarterback who wins acclamation in the big homecoming game only to blow out his knee the first week in college, electronic music seems to be attempting to relive it's zenith with realizing that it just isn't going to pay the bills and its kind of dark with the electricity turned off and all.

Boards of Canada were (well, are, I suppose I shouldn't act like they are dead) one of the more enlightened electronic acts, less interested in dancing and more with attaining an atmosphere, as if you don't actually hear the music as much as become aware of it surrounding you. They perfected this approach with 1997's "In a Beautiful Place Out in the Country" that is the closest modern (i.e., post) electronic has come to recreating a dream sequence sonically. However, what do you do after reaching perfection? It was a tough task for the Boards, and although Geogaddi was pleasant enough, it felt a little like a retread of their debut. Their latest disc, The Campfire Headphase seems to be a first step forward for the Boards.

The Campfire Headphase has more song structure and less ambiance than of the earlier Boards albums, taking a cue from current indietronic darlings like Manitoba/Caribou and M83 (who, in turn, were heavily influenced by Boards of Canada in the first — ah, how I love our postmodern world). Luckily for the Boards, it sounds less like imitation and more like experimentation. "Dayvan Cowboy" layers the drifting keyboard lines of early Boards work with an almost bombastic drum and guitar section that begins to approach prog rock status. The same can be said for "Satellite Anthem Icarus" that begs for a whispered vocal like over the slow and seductive guitar and beat — it borders on RJD2 territory. Meanwhile, "Chromakey Dreamcoat" feels like a sequel to "In a Beautiful Place…", taking us all a little further into the woods.

These steps forwards, though, are balanced by many tracks that will remind even the most casual Boards fan of their earlier work. "Tears from the Compound Eye", "Farewell Fire" and "Slow This Bird Down" (trust me, its slow) are pages out of the late 90's Boards of Canada playbook and seem almost to bog down The Campfire Headphase comparatively speaking. These tracks, however, allow you to appreciate the refreshing nature of some of the more progressive tracks on the album.

Boards of Canada do an admirable job of keeping the flame of electronic music alive in a world that has mostly forgotten about its past glories. Much like the rest of the genre, Boards of Canada seems to be lost in either reliving those heights or trying to break free and rediscover the innovation that brought the genre to our attention in the first place. They've realized, "hey, maybe this blown knee is a blessing in disguise and now I can go out and be the best darn botanist ever, like I've always dreamt". The Campfire Headphase will appease those Boards of Canada fans that long for the sound of the electronic heyday, but they also give us hope that they can escape that past at the same time.