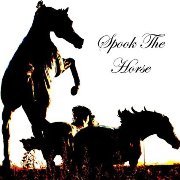 I'm only guessing at the name, but Spook The Horse sounds like the description of an animal's reaction to nature at its most tempestuous, released by a burst of unexpected wildness in the weather. That's how this forceful seven song mini-album comes across, sweeping and swelling like a storm, scaring a stabled creature into lurching in every direction. The notable thing is the horse is very beautiful, so the blur it makes as it moves is irresistible to the senses.

Spook The Horse are old Bellingham mates relocated to Seattle, playing in different bands for over a decade, and their instrumental musical prowess is evident all over their debut CD. The opening sound collage, "Intro," features No Wave fluttering feedback, shimmering acoustic picking, and a tribal beat with cymbals splashing around it. Then vintage synthesized keyboards gleam and a few bass notes open into the first song "Drag," combining the big beat of current emotional rock with the sweep of majestic 80s art-pop.

William Grant Burton's vocals are almost (but not quite) bat-cave-gothic in their suave, inimical implication: a little Julian Cope, a little Ian McCulloch, and a bit of Bryan Ferry sometimes, maybe. Brian Joseph Papenfuss establishes his worthy drumming dominance in the band's sound early, but he never overtakes the onslaught of waves of melodic guitar. A weird little Tin Pan Alley melody is included in the middle of "Drag," nicely breaking up the ominous mood, before crashing back into the lurch-chorus, "Don't you know what a drag this is?" It's the sound of a relationship pushing and pulling, until it all ends with vociferous rock and roll chants of "Hey! Hey! Hey!" that let both parties know it's not pretty, but it's done. Somehow the sound of love being torn apart isn't muffled by the band laughter in the studio at the end.

Third song "Sounds" crunches down all over the place, the watchtower of electric guitar squealing and smashing all over Papenfuss's Wagnerian pop percussion. A break in the madness for some soft psychedelic Brit-pop style in "C And I" allows the band to stretch more relaxed chops, and for Burton to sink into a sexy speak-sing — "She said that she'd love to go dancing — dancing in a field of fallen trees." A monochromatic synthesizer note opens into the space-surf rock of "Blasting Orchestra," the song title an often fitting description for the band itself, and then breaks into an almost Stones-like guitar and drum break midway through. More delicious tom-tom fills flush everything toward another epic conclusion, and then keyboard-squiggles out as abruptly as it began. A lovely piano into to "Old Ironside" sets up for a tense, dangling composition about desire and decay. ("In a city of burning trees I'm losing all my memory.") The closing "Walls" tweaks the transcendent flavor of most songs even further, and has a strangely inverted gospel flavor, with its Monk-like vocal harmonies over Matthew David Ralston's exquisitely rubbery bass-lines.

Spook The Horse is a powerful force, probably awesome to see live, and the fact that this is their debut release is astonishing.