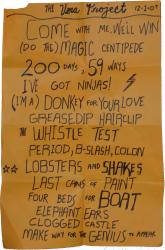 A stormy night with BOAT

Neither snow nor rain nor heat nor gloom of night can keep me from attending a BOAT show. Really only a 300-pound bouncer with an eye for fake IDs can. So although the sudden snowstorm may have prevented a larger crowd from gathering at VERA last night, I was there to once again witness the BOAT magic.

The show featured four talented and diverse local bands, opening with the catchy punk hooks of the Quiet Ones and ending with the Cops celebrating the release of their new CD Free Electricity. Sandwiched between these two hard-rocking bands was a sloppy-pop center made up of Throw Me the Statue and BOAT. It was these bands that motivated me to brave the elements and make the dangerous commute downtown.

Before Saturday night I hadn't heard much of Throw Me the Statue, but as I drove down to VERA luck would have it that Audioasis was playing a track off their latest CD Moonbeams. I fell fast for their poppy riffs and cute, muffled vocals, and their live show only solidified my admiration. Throw Me the Statue is a really fantastic and energetic band with lots of great keyboards and a star shaped tambourine. I don't know how else to describe this band but to say that they are everything I look for in my local music. They danced, they had effortless harmonies, and did I mention the keys? Their enthusiasm on stage was infectious, and for two songs in a row they got the whole audience to clap along, including a cover of the Guided By Voices song "My Valuable Hunting Knife." Perhaps the most impressive part of their performance came at the end of their set, when the guitarist took over the keys, and the keyboardist executed the most remarkable xylophone solo I have ever heard. His mallets were moving so fast they were invisible to the naked eye. Unfortunately Throw Me the Statue's set was much too short, as they had to take off for their official CD release party at the Croc, but their full length Moonbeams is now most definitely on my Christmas list.

Finally, the band I braved the storm for, forced my parents to drive on slushy roads for: BOAT took the stage. I realized before the show that I hadn't seen BOAT since the Three Imaginary Girls' anniversary party, way back in July. Maybe it was just because of the withdrawal, but their performance seemed even better than usual. The sound was CD quality, but the little jokes they threw into their live songs made each one personal. BOAT has taken the local music scene by storm, winning TIG's Best Album of the Year in 2006, and surly prime contenders for the same award this year. Their unique sloppy-pop sound is full to bursting with strange noises from a variety of obscure instruments. It seems that every BOAT song is completely new, never to be confused with another melody. The set list was full of gems from their two LPs (Songs That You Might Not Like and Let's Drag Our Feet!), but also included two new songs (goodness these boys keep busy!). They introduced one new tune by saying, "It's about a band we like." Someone in the audience shouted, What band? So they gave us clues. Some of them have beards. None of them smoke. I asked, Do they like diet soda? Yes, answered lead singer Dave Crane, I've heard some do like diet soda. The song is called "Four Beds for BOAT," and is one of the more adorable songs I can think of, with humble lyrics and a sweet, sleepy melody. Near the end, lead Dave checked his watch and noticed it was 10:15. He said nervously "We're supposed to be done by 10:15. Oh well, I hear the Cops are lenient in Seattle". And that little pun made my evening.

I think this is a good time to mention that one of the highlights of the night was the rock-star lighting operated by a kid in the back known as Lane. I've heard photographers complain about VERA lighting, how it's not good for picture-taking, but it was incredible that night for creating a real mega-concert atmosphere. Throw Me the Statue's lead singer Scott Reitherman even said during his performance, "Whoever is doing the lights, thank you for blowing my mind". I don't know how he did it, but the talented youth managed to make the lights match every song almost perfectly. Kudos Lane!

Finally, I was gifted BOAT's set list (shown above), which was given to me very generously by extreme BOAT fan Al Sauer. I think it's every bit as adorable and artful as BOAT themselves.