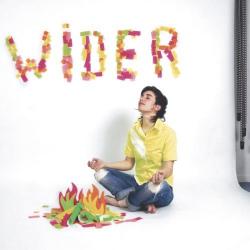 This is the second year in a row that K Records has blindsided me with a ridiculously excellent album right when I thought all the best albums had made their way out into the shops. Much like last years Paper Television by the Blow, Tender Forever has recorded a little synth pop masterpiece called Wider. Okay, sure it helps when you record your album with Khaela from the Blow and are wrapped in the swaddling cloth of K Records. It doesn’t hurt to be French, either, and move across the ocean to Portland, Oregon, like Melanie Valera of Tender Forever. Add it all up, and I suppose it was inevitable, but Wider is a great surprise treat for end the year.

If anything, Wider is exactly what you might expect from K Records these days: heartfelt, homegrown, and ridiculously charming. The album opens on “Tiny Heart and Clever Hand,” with softly strummed guitars that suddenly get accompanied by a stuttered laptop-generated rhythm section that would make Jimmy Tamborello blush. This is exactly the sort of tender synth-pop for which the Postal Service paved the way, thick and electric without being soulless. The song itself sort of drifts between a Mirah-like ballad into Bjork’s backyard as it builds the tension, until you feel like the song itself might explode. Right on the heels of “Tiny Heart and Clever Hand” on the melancholy synth pop mantle is “Heartbroken Forever,” whose mere title should make any properly Conversed-and-rolled-jeaned hipster shed a tear. The song is dynamic and captivating, with a cute faux-xylophone line that dances through Melanie and guest vocalist Heather Treadway’s voices. Hearing them chant out, ”My heart is okay and it’s strong and it reels, it can take anything and it takes everything” catapults this song into the realm of champion break-up song space.

“Folded Paper” is cut from the same cloth as the Postal Service, right down to the opening lines of, ”All the things people do at night are like tiny secrets made of loving words and I’m ready to get their secrets in my ears.” Valera does a great job of out-Gibbard-ing ol’ Ben on that one. “How Many” is a wondrous pop gem that sounds like a frantic love song, exposing the fearful side of being in love with someone, not knowing what might happen. “No One Will Tell No One For Sure” is more restrained at first, but it builds the tension until it seems to open up into a glorious sunny field in the middle of the forest. A playful mood dominates “Well I Can Take It,” filled with inspiring little gems like, ”Whatever I feel, I better feel it right, my life is too short to make it bad.”

Tender Forever is a little more aggressive with the computer noises on “Doves vs. Pigeons” and “In the Backyard,” and both songs are driven by forceful and insistent synthesizers and metallic rhythms. Although the songs are both interesting, they seem to lack a bit of the charm of the more pop-centric songs on Wider. There are a few more conventional takes on the disc, like the Feist inspired “Nice If They Tried,” a piano and rhythm piece or the guitar-centric “I’m So Tired," both of which are nice enough but feel a little out of place.

Maybe I am just a sucker for female vocals on top of melancholy synth pop that could have been recorded on my Macbook. Okay, well, replace that “maybe” with, well, just remove the “maybe” and you’re spot on. That shouldn’t take away from the fact that Wider is a breathtaking piece of modern rock that takes the sound of the Blow and Yacht and puts more of a soul into the sound. Not that those bands lack a soul, but Tender Forever have a way of sounds like she’s singing directly to you, one-on-one, and it is that personal touch that makes Wider such a sonic delight.