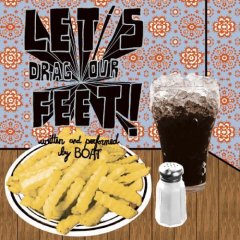 When Boat released their Magic Marker Records debut, Songs That You Might Not Like, last year, the title implied uncertainty, a lack of self-confidence — but it was done in such a way (with illustrations of cartoon character groupies on the cover) that it seemed tongue-in-cheek. A cheekie sort of announcement: “Here we are,” they seemed to be saying. “Take us or leave us — but don’t say we didn’t warn you.”

Preceding that record paraded self-released, scrap-book ready records burned on home computers and distributed at shows in neat little school project jewel cases of construction paper. Notably, Life is a Shipwreck, We Must Remember to Sing In the Lifeboats, an album as full of reverb as a Joy Division seven-inch, and as heavy with nonsense wit to bring Colin Meloy to drive Colin Meloy insane. Some of these early songs were revamped (with much less reverb) in a better recording setting for Songs…, signaling the band’s coming-of-age, their maturation of “sound.”

Now post-pubescent, Boat unleashes Let’s Drag Our Feet, the album they’ve been trying to make the last few years. What’s even better, they know they did it right.

Let’s Drag Our Feet begins with a bluesy in-your-face rocker, “Come With Me, We’ll Win,” chock-full of confidence and competence and drum-accompanied “ba-ba-ba’s” and hand-claps that, for all the traditional indie-pop ingredients (easy chord progression, hand-claps, nonsense) only flaws in that it lasts just two minutes, almost a full half of that being devoted to chanting about how much we’re all gonna “win,” and how Boat can “drink the most beer.” If that weren’t enough a sign that Boat’s found their niche, they open the next track, the wonderfully-yet-stupidly titled love song, “(I’m A) Donkey For Your Love, with a Beatles reference. “They told me ‘bought the strawberry fields, living in a mixtape and picking all the fruit that it yields… I made you a copy just so you can see how I feel.”

Somehow, though, it all seems profound. When Tullycraft said, almost a decade ago, “You’re as pretty as a pink lemonade,” it was oddly touching, the type of thing you could never tell a loved one face-to-face — but in a mixtape? Fair game. Boat’s harnessed that feeling. Not just with this song, but indeed with the bulk of a record that cruises through 14 tracks in under 39 minutes (take that, Weezer) and gives the indie-twee-pop set another valentine: “I’m a donkey for your love, I’ll carry you on my back.”

In the outro to “Illustrate the History,” Boat lays out, in loving call and response, their goals: “When I grow up, I want to be an old-fashioned music man… to tour Europe and Japan… to be in a successful band.” They’re “gonna change the course of history, gonna begin the end of history” singer D. Crane croons on “Whistle Test,” making good on the preceding lo-fi transition, and promisings that, “If we leave our coats on the coat rack, you can count on us, we’re coming back.” We can only hope that extends to another record.

Let’s Drag Our Feet doesn’t break any rules. And Boat’s not a band to pretend that they’re trying be Radiohead. What Let’s Drag Our Feet does do, however, is manage to make you forget the rules, and just want to linger (dragging your feet, perhaps?) in this world of absurd with and humor, where donkeys are metaphors for love and love is threatened only “The Ferocious Sounds Of Lobsters And Snakes” (the stand-out ballad on the record). Nevermind that hand-claps have been getting old for awhile. Never mind that they harmonize with “la-la-la” and “ooooooo” in the back of just about every chorus and bridge, so much that it’s easy to want to not like the record. Nevermind that “Whistle Test” actually employs a whistle blow to signal the begin of what can only be described as the “rocking out.” Nevermind all those things that Joanna Newsom devotees (myself included) might try not to like. It’s impossible not to love a record like this. These songs, for all their simplicity and absurdity, are fucking brilliant. Anyone who says otherwise thinks they’re way too cool for school.