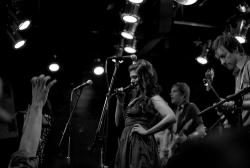 Bobby Bare, Jr. broke my heart, and U.S.E. helped me forget all about it.

Saturday was probably the weirdest multi-show night I've experienced in quite some time. Hopping from the Tractor to the Sunset, or catching Jon Auer, Pablo Trucker and Visqueen all in one night – that doesn't sound like it's beyond any kind of logical scope. It's just a handful of shows. But Bobby Bare, Jr. at the Sunset — a whopping dose of brilliant, funny, melancholy singer / songwriter — and then the U.S.E. show at the Crocodile? Seriously. Strangely enough, the shows meshed up a lot better than I realized they would, and I even had enough time in between to find good parking.

Bobby Bare, Jr. was just amazing. The Sunset was packed to the gills forty minutes before showtime — mind you, for the early show! People had crammed in all the way up to the stage, drinks in hand, grinning ear-to-ear. Save for the track he did for one of the live KEXP compilations, I hadn't acquainted myself much with Bobby's work, except to know that I liked what I had heard so far. And when he took the stage to roaring applause and decibel-breaking whistles, it was no disappointment for this new fan — he absolutely killed.

We were treated to a good long set of favorites and some gorgeous covers, recordings of which were available (at shows only) for ten bucks. Ten bucks! Tracks by America, and Bread, and a host of full-throttle American heartbreakers. They were sold out by the time I made my way to the back of the room, but if you happen to find yourself in Ballard tonight, you can probably pick up a copy — an electric version of last Saturday's set is taking place with Mark Pickerel and some other local faves sitting in to kick it up a notch. It's the early show, so watch your clocks and get there in time for a good spot!

Then it was off to the Crocodile, to shake it up for U.S.E. and Velella Velella. Holy crap. From mushy-hearted funny to a full throttle dance party, in three notes or less. Just like the Sunset, I walked in to a fully packed house and wove my way up front (thanks to Laura) to catch the remainder of the show. And it was totally and completely awesome.

Velella Velella was one of those bands I knew that I knew, but couldn't think of their sound — and what a treat it was to hear them live. Pulling off live music like theirs can be a little tricky, but they hit a homerun, and had the whole room dancing from the very start of their set. U.S.E. brought their game face to the stage shortly afterward, and proceeded to assault the crowd with a big shot of sparkly disco-ball amazingness. All sore feet and ringing ears afterwards, it's a show I'm glad I made a point of getting to.

On a side note, it's nice to see the Croc transition so well from holding full-throtte rock shows to full-force electronica night, with the lighting and sound skills to match both cases perfectly. I know I'm the new girl and all, but I'm sure glad this club is back in town.